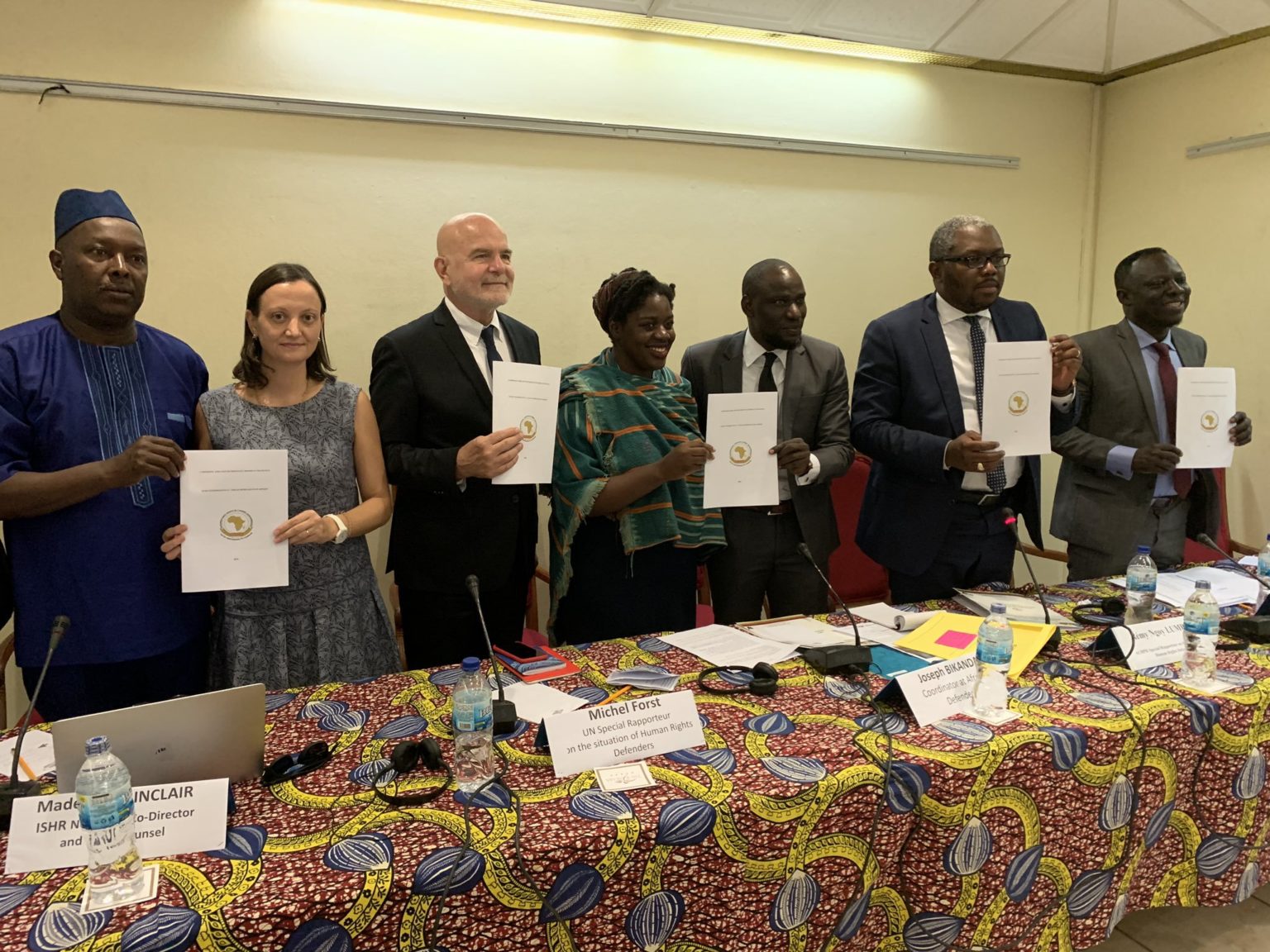 6 December, 2019
ACHPR: Reflections on the 65th Ordinary Session of the African Commission on Human and Peoples’ Rights

Posted at 12:37h in AfricanDefenders, East & Horn of Africa by Gentrix Barasa
Share

I had the honour in my capacity as Chairperson of AfricanDefenders and Executive Director of DefendDefenders to lead a joint delegation of more than 20 persons, including staff and human rights defenders (HRDs) from Algeria, Cameroon, Egypt, Sudan, Tanzania, Tunisia, and Uganda to attend the 65th Ordinary Session of the African Commission on Human and Peoples’ Rights (the Commission) from 21 October to 10 November 2019, in Banjul, Republic of The Gambia.

Over the past ten years we have consistently engaged with the Commission, its special mechanisms, and given the opportunity to HRDs from different communities to participate at its ordinary sessions to ensure that their voices are heard at this important continental platform.

Prior to the Commission’s ordinary session, the delegation participated in the NGO Forum from 17 to 19 October, where we presented the human rights situation in the East and Horn of Africa. The NGO Forum provides an opportunity for civil society participants to network and discuss issues pertinent to human rights on the continent, within the context of the African Union (AU) theme for 2019: “Year of Refugees, Returnees and Internally Displaced Persons: Towards Durable Solutions to Forced Displacement in Africa.” We hosted a panel discussion on HRDs in exile to outline the strides made in the protection of HRDs in Africa through the Ubuntu Hub Cities Initiative, an African-based relocation mechanism that provides safety for HRDs while allowing them to continue their human rights work.

Over the past twelve years, I have had the opportunity to engage with Hon. Maiga Soyata, outgoing Chairperson of the Commission. I can find no words to describe her resilience, dedication, and commitment to promoting human rights on the African continent. Her enormous contributions were acknowledged and honoured by AfricanDefenders with the prestigious “Shield of Africa” award in June 2019. I also expressed my gratitude to the other outgoing commissioners for their openness and contribution in strengthening human rights systems on the continent.

I would also like to congratulate the newly elected Bureau members who will serve for the next two years: Hon. Commissioner Solomon Ayele Dersso as Chairperson, and Hon. Commissioner Rémy Ngoy Lumbu as Vice Chairperson. I wish them all the best in their new posts and look forward to fruitful cooperation with them in the future.

On a more sombre note, the Commission lost one of its former members, Hon. Med Kaggwa (2011-2017) on 20 November. We extend our condolences to his family and the human rights community, which he diligently served.

Additionally, I submitted our Bi-Annual Report to the Commission detailing the state of human rights in the East and Horn of Africa sub-region, and listing violations of freedoms of association, expression, and peaceful assembly in DefendDefenders’ 11 mandate countries between April and October 2019.

I also had the privilege of sitting on a panel discussing national legislative frameworks for the protection of HRDs, where, along with UN Special Rapporteur on the situation of human rights defenders Michel Forst, we urged states not to include narrow definitions of HRDs in their protection laws, and encouraged legislators to refer to inclusive and comprehensive definitions in the UN Declaration on HRDs.

On the margins of the Commission, we also hosted or supported several side-events with partners, drawing attention to specific human rights concerns across the continent.

On 21 October, AfricanDefenders hosted a side event on the unfolding situation in Cameroon, along with the Réseau des Défenseurs des Droits Humains en Afrique Centrale (REDHAC), which included testimonies from HRDs working amid the country’s crisis. The side event highlighted the deteriorating situation, especially in light of efforts that have yet to bring about adequate changes in the country. Together with more than 80 other organisations, we also issued an open letter to Hon. Chairperson Dersso urging the Commission to address the serious and systematic human rights violations that continue to take place in Cameroon.

On 21 October, we further co-hosted a side event and panel discussion on the future of Sudan since the popular uprising that toppled long-time dictator Omar al-Bashir in April 2019, in conjunction with Human Rights Watch, Amnesty International, African Centre for Justice and Peace Studies, and the International Commission of Jurists. Panellists discussed the roots of the revolution, in addition to what the future holds as citizens try to hold accountable the transitional government and ensure democratic elections soon. Most importantly, a representative of the families of those killed during the revolution gave moving testimony of the real impact of all that has transpired since December 2018, and I would like to personally thank him for his bravery.

DefendDefenders also co-sponsored a side event organised by the International Service for Human Rights focused on ending reprisals against those who cooperate with regional mechanisms in Africa. Hon. Vice Chairperson Ngoy Lumbu used the opportunity to launch a comprehensive new policy on intimidation and reprisals, while Special Rapporteur Forst and UN Special Rapporteur on freedom of Association and Peaceful Assembly  Clément Voule brought in knowledge and experience from working with UN systems.

I convened my delegation to a working dinner with Hon. Vice Chairperson Ngoy Lumbu, and Special Rapporteurs Forst and Voule, in order to link HRDs to African and UN mechanisms as entrusted by the dialogue between Special Procedures Mandate-Holders of the UN Human Rights Council and the Commission, commonly known as the Addis Ababa Roadmap.

Ultimately, the Commission adopted nine important resolutions, four of which have a direct bearing on our work in the sub region, and once implemented will significantly contribute to creating a safer working environment for HRDs.

We reiterate the call in the  Resolution on the Human Rights Situation in the Republic of South Sudan, to operationalise the Chapter V mechanisms of the revitalised agreement, and fast track the establishment of the government of national unity. The people of South Sudan have experienced untold suffering since 2015 and implementing this resolution sets the foundation for healing and restoration of Africa’s youngest nation. The Resolution on the Human Rights Situation in the Federal Democratic Republic of Ethiopia, condemns the recent wave of ethnic and religious conflicts and emphasises the need to initiate prompt, impartial and effective investigations to ensure accountability for the victims. Failure to address this situation dents the progressive efforts made by Prime Minister Abiy’s government towards reform.  A few countries under our mandate are scheduled to hold elections starting 2020, therefore the Resolution on Elections in Africa is timely and stresses the need for governments’ to adhere the African Charter on Elections and Good Governance and allow their citizens to exercise their right to vote in an environment free from intimidation or violence. I welcome the resolution on the Drafting of an African Declaration on the Promotion of the Role of Human Rights Defenders and their Protection in Africa. It will set a regional standard on protection of HRDs and recognise their crucial role in promoting human rights. We are encouraged to see the Commission taking continued action with positive resolutions aimed at improvement the human rights situation across the continent.

Our work at the Commission remains a priority, and we pledge to continue supporting the Commission to achieve its objective to protect and promote human and peoples’ rights as stipulated in the African Charter.