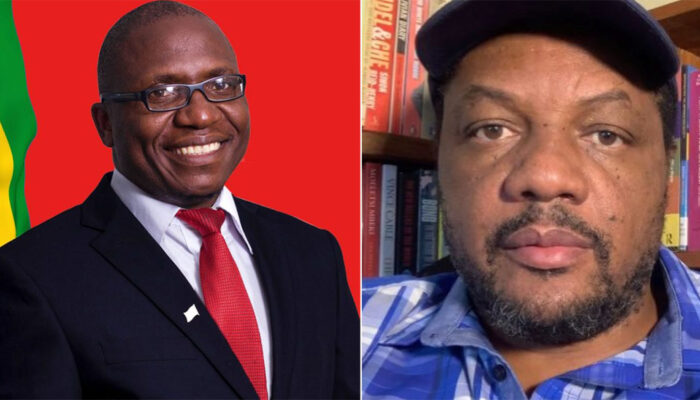 Posted at 07:51h in Southern Africa by Gentrix Barasa
Share

The arrest of Hopewell Chin’ono was captured on camera when police armed with guns, vandalized his property, breaking a glass door to forcibly gain entry. He was dragged away from his home without a warrant of arrest and no identification from the officers, in an incident that was tantamount to an abduction. Chin’ono, an award-winning investigative journalist has recently been instrumental in exposing high levels and systemic corruption in Zimbabwe.

“We deplore the increasing weaponization of the law to attack civic space and silence human rights defenders in Zimbabwe. Over the years we have seen the systematic misuse of the law by state security institutions, including the police and central intelligence agents, to target dissenting voices and those advocating for accountable governance. These were the same tactics used in pre-independent Zimbabwe and it’s unfortunate the phenomenon continues to exist in what is supposed to be a democratic and free Zimbabwe. Criminalizing defenders which undermines rule of law cannot be a good state policy and must be stopped immediately”

Professor Adriano Nuvunga, a steering committee member of the SAHRDN and Executive Director at the Centre for Democracy and Development (CDD) in Mozambique.

Leading human rights lawyer Beatrice Mtetwa later posted a video standing in front of the shattered door of Hopewell Chin’ono’s house, confirming the arrest of her client, but unbale to verify who had taken him and where he had been taken to. SAHRDN is aware that for several hours, Chino’ono was denied access to his lawyers, nor was he promptly informed of the charges he is facing, which was in violation of his due process rights.

Preceding his arrest, Hopewell Chin’ono had reported receiving verbal threats from ruling ZANU PF members following his corruption exposé that eventually led to the firing of Zimbabwe’s Minister of Health who was implicated in the diversion of public funds meant for COVID-19 purposes.

Jacob Ngarivhume is the President of Transform Zimbabwe, an opposition political party in Zimbabwe, who has been calling for a public protest against bad governance and corruption that is scheduled for on 31 July. Prior to his arrest, he had been similarly receiving death threats from suspected government agents or sympathizers.

The arrest of Chino’ono and Ngarivhume are the most recent in a series of arrests and attacks of human rights defenders and legitimate political opponents, targeted for merely speaking out against corruption and bad governance in Zimbabwe. Just this past week suspected state security agents broke into the house of Mr Obert Masaraure, who is the President of Amalgamated Rural Teachers Union of Zimbabwe (ARTUZ). They briefly but forcibly held his wife demanding to be told the whereabouts of Masaraure. Masaraure has been a victim of abduction and torture by state agents for his activism. ARTUZ has been key in calling for better living conditions of Civil Servants, particularly rural teachers. We also saw nurses being arrested and detained for striking for better working conditions and essential protective clothing in light of Covid-19. Young human rights activists, Namatai Kwekeza, Youngerson Matete and Prince Gora were recently arrested for staging a protests against proposed constitutional amendments. This was the second arrest of Namatai Kwekeza in less than a month.

The United Nations Special Mechanisms have recently written to Zimbabwean authorities on the abuse of human rights defenders and violation of the rights to freedom of expression, association and assembly. The continued targeting of defenders especially during a global pandemic where government should be more accountable is counterproductive.

The SAHRDN strongly calls on Zimbabwean authorities to stop persecuting human rights defenders, journalists, and democracy activists who are legitimately exercising their constitutional rights. We also call for the immediate and unconditional release of Hopewell Chin’ono and Jacob Ngarivhume and that their safety be guaranteed.