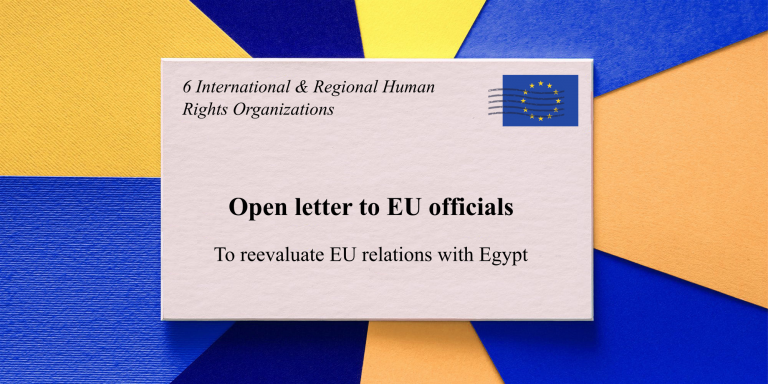 Posted at 08:04h in Northern Africa by Gentrix Barasa
Share

We are writing to urge you to lead a comprehensive review of the EU’s relations with Egypt in light of the sustained and unprecedented crackdown on human rights in the country. We call on you to devise and implement a holistic and result-oriented strategy, using all instruments at the EU’s disposal to urgently halt this abusive trend and better engage with Egypt on protecting human rights, promoting the rule of law and combatting impunity.

In September 2019, thousands of peaceful protesters across Egypt took to the streets to demonstrate against high-level corruption in government and in the military, as well as austerity. The Egyptian authorities responded with a massive wave of arrests, in which thousands of peaceful protesters and citizens suspected of dissent were arbitrarily detained within a matter of weeks – more than 4,000 according to the Egyptian Commission for Rights and Freedoms. These arrests were accompanied by a violent crackdown on journalists, human rights defenders (HRDs), trade unionists, NGOs, and peaceful opposition party figures. These arrests came as part of a pattern of brutal attacks against civil society and suppression of fundamental rights and of all forms of dissent which has significantly worsened under President al-Sisi’s rule.

Sadly, the severe deterioration of human rights in Egypt was met by silence from the EU, mostly due to EU member states’ divisions which have made it nearly impossible to secure EU statements of concern, let alone to adopt more persuasive measures. The EU’s passivity regarding the latest wave of government violence, arrests and intimidations prompted the European Parliament to call for a comprehensive review of the EU’s relations with the country, which we agree is urgently needed given the failure of the current approach to produce any meaningful results. Specifically, we urge the EU to:

We would also like to request a joint meeting with you in order to discuss these issues further.

We look forward to your response, and remain at your disposal to provide any further information.

[1] The agreement establishing the European Bank for Reconstruction and Development, stresses the commitment of all contracting parties to fundamental principles including the rule of law and respect for human rights.