Posted at 08:22h in East & Horn of Africa by Gentrix Barasa
Share

On June 16, 2020, the Electoral Commission announced the resumption of electoral activities under a revised Roadmap for 2020/2021 General Elections. Since then, there has been heightened political activity as political parties navigate the party primaries. That process, so far, has been characterised by high levels of violence and abuse of human rights. HRDs are often being caught in between the contest.

Friends, this election is unique as it comes in a period when we are faced with COVID-19, a dangerous pandemic that continues to ravage the globe in unprecedented ways. We salute the Ugandan Government that has done commendably well to safeguard Ugandans from the spread of the virus. However, there has been a high cost on socio-economic status of many families and an escalation of human rights violations.

Just the other day while we held our Annual General Assembly, the Charge D’Affaires of the Royal Netherlands Embassy Joris Bommel remarked, “Measures in some countries threaten to work against people and increase existing inequalities. We see reduced space for free press, opposition and human rights defenders. Discrimination is on the rise, and women’s and girls’ rights are under pressure.” We invited you here to address you on some patterns that need to be highlighted in regard to human rights but specifically on how they impact the important work of Human Rights Defenders.

As you may have learnt, the National Resistance Movement (NRM) party held its primaries on 4th and 11th September respectively and close to 2,000 incidents of electoral violence have been reported in various police stations across Uganda. Reports indicate that at least 20 people have so far been arrested for their involvement in malpractice and use of violence in the electoral contests. The indiscriminate violence has not spared Human Rights Defenders. In a recent report by the National Election Watch Uganda, a local electoral observation network, several districts including Mbale, Sembabule, Kassanda, Adjumani, Kampala, Wakiso, Mityana, Sironko, Bundibugyo, Hoima, Kiruhura, Kazo, Sheema, Bushenyi, Koboko, Kassanda, Tororo, Busia, Kakumiro and Iganga are emerging as electoral hotspots ahead of the 2021 General Elections. This does not depart much from our findings Democracy on Trial in 2019, where we analysed several incidents of human rights violations in the past election and emphasised that lack of accountability will encourage impunity for violence in electoral processes.

Highlight of attacks on HRDs

Between 20th and 22nd May, 2020, two HRDs from Friends of Zoka, an environmental rights group based in Adjumani and with operations in Moyo district were threatened by the RDC Moyo Bob William Labejja. The HRDs have been engaged in an investigation of illegal logging taking place in the sub-region specifically in Metu Sub county, Moyo district. The threats to the lives of Amanzuru William and John Unzima have persisted to date. Environmental rights defenders globally are coming under pressure and we must push back.

On 4th September 2020, 8 land rights defenders were arrested and detained in Kiryandogo on the instructions of the area DPC. The 8 HRDs namely; Mwawula Fred, Ndahimana Ramu, Kusiima Samuel, Martin Munyansia, Martin Haweka, Wafula Amos, Muloni Wanjala and one Talemwa were arrested and detained without charge. This follows rounding up and arrest of 7 lawyers who were investigating circumstances surrounding the forceful eviction of over 35,000 people being disposed by 3 multinationals (Agilis Partners, Great Season and Kiryandongo Sugar Limited) on 30th June 2020 by anti-riot police. The lawyers arrested include Kaijuka Aaron, Christine Marunga, Joan Balyerali, Brian Tuwayenga, Eric Bajole, Muhindo Morgan and Nafula Elizabeth.

The Kiryandogo evictions are not in isolation. Similar illegal and forceful evictions have been on-going in Kikuube pitting citizens and HRDs against state actors. Some HRDs who have vehemently mobilised citizens to oppose the illegal evictions have come under scrutiny by the local area RDCs.

Targeted attacks continue unabated. In one of the most recent incidents, unknown assailants broke into the home of re-known human rights crusader Advocate Nicholas Opiyo Esq on the night of 8th September, 2020 and targeted his communication gadgets; that is phones and laptops. Nicholas had appeared on NBS Television the previous days to offer analysis on events surrounding the NRM primaries and particularly the Ntungamo incidents that led to the arrest of former Attorney General Hon. Rukutana and his subsequent on-going prosecution.

HRDs’ right to assembly has hugely been stifled in some cases under the guise of COVID-19 restrictions. Following the Bugoma Forest takeover, activists initiated a SAVE BUGOMA CAMPAIGN. The group urged the Parliament to use its oversight powers to investigate the actions of NEMA, Hoima Sugar Ltd and Ministry of Lands for issuing land titles in forest reserves, approving Environmental and Social Impact Assessment reports in disregarding of national laws and other illegal actions. On 10th September 2020, a letter surfaced written by the Inspector General of Police denying the activists the right to peacefully assemble and protest the takeover of Bugoma forest by Hoima Sugar Limited.

Especially during the electoral period continue to come under sharp attack. In the Human Rights Network for Journalists Press Freedom Index, 2019, 165 cases of violations against journalists during the course of their work were documented. The report cited the Uganda Police Force and the Uganda Communications Commission as the lead violators of expression rights and journalistic freedoms in Uganda. In the recent Freedom of Expression Summit convened by Chapter Four Uganda, civil rights advocates expressed concern about the use of vague minimum broadcasting standards to stifle press freedom and target individual journalists.

On 26th July, 2020, Ugandan comedians Bizonto, Journalist Bassajja Mivule and Musician Kiwewa were arrested on allegations of promoting sectarianism and held beyond 48 hrs without appearing before courts of law. Comedians fear regulations will destroy political satire and restrict free speech. The performers would need to sign a code of ethics and have their scripts approved by a committee, under the 2019 Regulations.

On the 8th September 2020, the Uganda Communications Commission issued a notice to bloggers introducing annual fees for anyone making communication using digital platforms. This according to various actors sets a bad tone and is a continued affront on the freedom of expression. It follows a call on the 21st August, 2020 from the Uganda Human Rights Commission urging the state to roll back the controversial OTT tax and in the alternative suspend it for such time until the digital campaigns come to an end.

Women Human Rights Defenders have hugely been affected by the lockdown and the shift to digital/virtual working. With the unprecedented COVID-19, there was a huge spike in Gender Based violence countrywide and this hasn’t spared women human rights defenders especially in the countryside.

Opportunities towards opening up the civic space

Since 2016, the Defenders Protection Initiative together with key collaborators the National Coalition for Human Rights Defenders- Uganda (NCHRDU), Defend Defenders, Human Rights Centre Uganda (HRCU), and Chapter Four Uganda have been at the forefront advocating for a law to protect HRDs in Uganda. Following a series of consultations, on 9 July 2020, Hon. Lyandro Komakech (MP Gulu Municipality, and mover of the Bill) sought leave of parliament to introduce the Bill as a private members bill. With the support of the collaborators, the movers of the Bill have now embarked on a multi-stakeholder consultation across the country, on the substantive elements of the Bill. 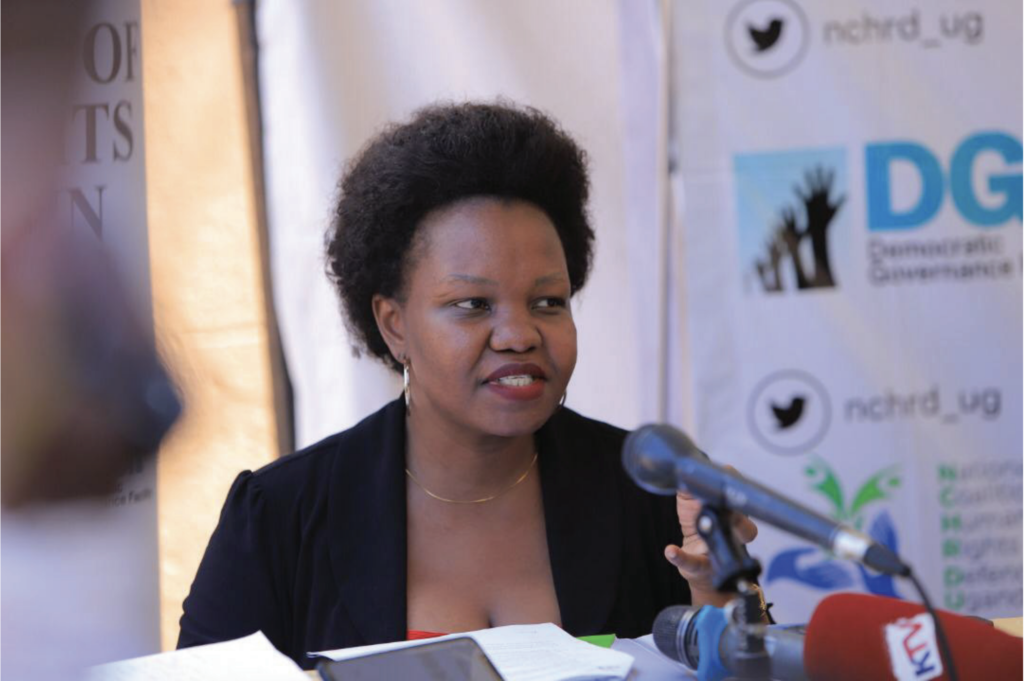 To the Uganda Police Force:

To the Electoral Commission:

To the Uganda Communications Commission