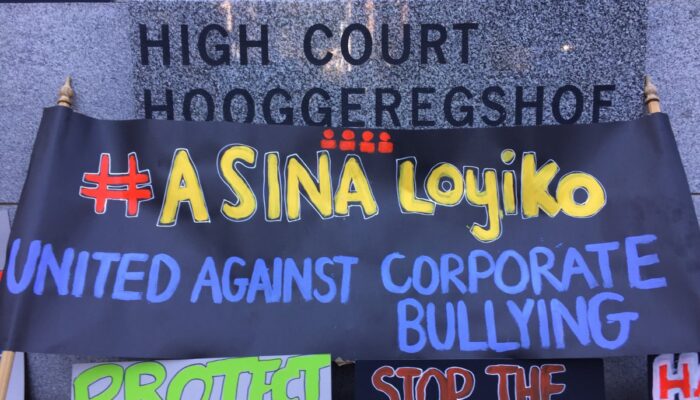 Posted at 16:30h in Southern Africa by Gentrix Barasa
Share

This week, the Western Cape High Court is hearing an application which finds its roots on MRC’s long-standing journey to develop local mining relating to titanium minerals at Xolobeni, in Pondoland and tormin mineral sands operation, which are both situated on the Wild Coast in the northern part of South Africa’s Eastern Cape province. Since the start of the mine’s project proposal, the community members of Xolobeni have strongly resisted bids against both the State and the MRC to grant mining license for the suggested local mining ventures. They have been subjected to several human rights violations as a result. This includes the murder of Sikhosiphi ‘Bazooka’ Radebe who was killed at his home after receiving anonymous death threats, and the arrests are yet to be made. Additionally, due to the ongoing pressure from both the State and the MRC in fighting to implement the proposed project, members of the Xolobeni community engaged in a landmark public interest litigation in 2018, in which the Pretoria High Court held that “the Minister of Mineral Resources cannot grant a license to any mining company without first obtaining the full and informed consent of the affected community”.

As such, the matter inspired activism on both grassroots, national and international level, with criticisms expressed against the MRC and the State through the use of public platforms by countless individuals, including the six HRDs in which the case is brought against.

In its application, the MRC is claiming damages of R14.25 million ($ 846 000), or in the alternative, public apologies, from the six South African HRDs. However, the HRDs argue in their court papers that the application is part of a strategy employed by the MRC to silence and intimidate them from exercising their constitutional right to freedom of expression, and this is commonly referred to as a ‘SLAPP’ suit. At present, South Africa has no established legislation to regulate the issue of SLAPP suits and there is little legal precedent from courts on this subject matter. Nonetheless, countries such as Canada, Australia and several States in America have enacted anti-SLAPP suits legislation, which mainly find its roots from environmental law. In terms of the international legal framework, the UN Committee on Economic, Social and Cultural Rights in its 2017 General Comment elaborated on States’ obligations to protect individuals under their jurisdiction from interference by third parties, by requiring State Parties to take measures, such as adopting a legal framework guaranteeing the free enjoyment of human rights to its citizens. Additionally, the UN Guiding Principles on Business and Human Rights provide the obligation to respect human rights as a global standard of expected conduct for all business enterprises wherever they operate.

“Now more than ever, we are witnessing an increase of human rights violations committed by both the State and major corporations not only in South Arica, but the entire African region and the world as a whole”, said Arnold Tsunga, Steering Committee Member of the SAHRDN. “The protection and fulfillment of the Constitution is dependent on a number of factors, such as ensuring public participation through safeguarding the right to freedom of expression and ensuring that no person is subjected to intimidation or harassment while exercising such rights”, he added.

The significance of the hearing that is taking place this week relates to the court being asked to consider the objections put forward by the defendants through two special pleas, entitled “Abuse of process and strategic litigation against public participation” and “Failure to plead patrimonial loss and failure to plead falsity”. In addition to the argument that the application amounts to the abuse of a court process that is aimed at silencing the defendants, the HRDs’ second special plea argues that a major corporation such as the MRC should only be able to bring a claim for defamation in circumstances where it can prove, amongst other things, that the statements made were false and it has suffered financial loss as a result. Nonetheless, should the application succeed, the HRDs are asking the court to develop the common law by bringing it in line with the Constitution and ensure that activists and individuals are protected from SLAPP litigation in the future. Additionally, the Centre for Applied Legal Studies (CALS) and the University of Cape Town have joined the case as friends of the court, with each organization arguing that the application should be dismissed on the basis that it is a SLAPP suit and lacks merit and that the protection of academic freedom is fundamental and should be recognized by law as a “qualified privilege for academic speech”.

“As the SAHRDN we reiterate the pleas made by the HRDs and friends of the court in this case and we are hoping for a successful outcome that can create the potential of establishing a necessary legal framework that seeks to prevent the stifling of public participation, that is meant to strengthen the cornerstone of a democracy,” said Mr. Tsunga. “The use of SLAPP suits is a serious emerging threat against several human rights, and we hope that this issue can also be resolved in many parts of the region,” he added. “We are mindful that the fight will be long, but we will continue to stand in solidarity alongside every human rights defender who is faced by this issue and ensure that a better region is created where activists are protected and their safety is guaranteed when exercising their right to freedom of expression and participating in matters of public interest,” Mr. Tsunga concluded.