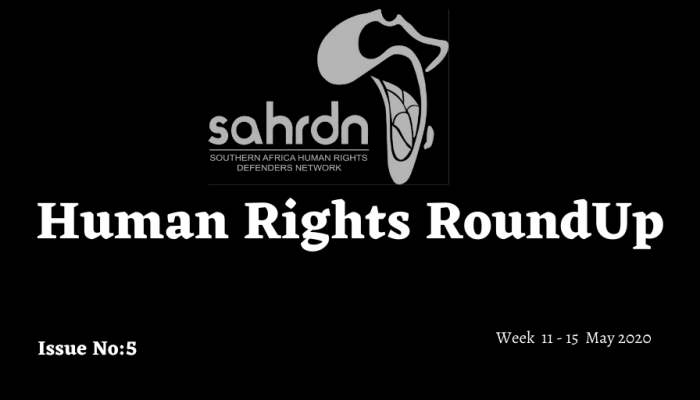 Posted at 07:50h in Southern Africa by Gentrix Barasa
Share

Access to water and proper drainage facilities and refuse removal are not guaranteed in many prisons or places of detention, yet washing of hands and general hygiene are key ingredients to the fight against the spread of Covid-19.

Calling for decongestion of prisons, which inevitably means calling for the release of some prisoners, is an emotive subject as public sympathy for detained people is generally low. Southern Africa is not spared this generalisation.

The systemic neglect of prisons and other places of detention in many southern African countries has resulted in inadequate resources, management, oversight and accountability mechanisms, including ill-equipped personnel and limited linkages to public health systems.

In addition, the prison population is distinguished by an over-representation of HIV and tuberculosis compared to the rest of the population. Prisons and detention facilities place the lives of prisoners and detainees, prison staff, lawyers and court officials at direct risk while pausing an indirect risk to the public as prisons become society’s breeding ground for communicable and infectious diseases.

That makes prisons and places of detention is everybody’s business.

Because of the particular vulnerability of detained persons during the Covid-19 period, the United Nations (UN), Rights Groups and Health Experts have encouraged governments to consider releasing their most at-risk inmates, particularly pregnant women, the elderly, people with disabilities and those with underlying conditions such as tuberculosis (TB) and HIV.

“The fact that prisons are high-risk places for transmission of Covid-19” caused over 37 Non-Governmental Organisations (NGOs) operating in Africa to issue a joint declaration 24 March 2020, calling on African Union member states and international human rights organisations to take urgent and immediate measures to protect the rights of detainees in Africa.

On 25 March, the UN Committee on the Prevention of Torture and Other Cruel, Inhuman or Degrading Treatment or Punishment also called on governments to reduce prison populations wherever possible by implementing schemes of early, provisional or temporary release.

Article 16 of the African Charter on Human and Peoples’ Rights provides that “every individual shall have the right to enjoy the best attainable state of physical and mental health,” in line with international human rights law.

These rights were extended to prisoners and detainees when the African Commission adopted the 1995 Resolution on Prisons in Africa. It follows therefore that when a state deprives someone of their liberty, it takes on the duty of care to provide medical treatment and to protect and promote his or her physical and mental health and well-being, as laid out by the United Nations Standard Minimum Rules for the Treatment of Prisoners (Nelson Mandela Rules).

As prisons in southern Africa are slowly becoming  “factories” for production of Covid-19 and other infectious and communicable diseases, calls for release of detainees and prisoners have escalated over the last couple of months. Protests have also erupted among prisoners.

Recently, southern African governments have started a process of releasing some prisoners. The releases have been done mainly through amnesties granted under presidential pardon prerogatives contained in the laws of most jurisdictions.

Offenders excluded from the amnesty included those convicted of murder, treason, rape or any sexual offence, carjacking, robbery, stock theft and public violence, plus any conspiracy, incitement or attempt to commit these crimes or being an accessory after the fact to these crimes.

Having realised that the amnesty did not result in adequate decongestion of prisons in the country, the government granted amnesty to an additional 2,528 prisoners on 5 May under the amended amnesty proclaimed by President Emmerson Mnangagwa, shortening their jail terms to time served, taking the number of released prisoners to 4,208. Six of those released were serving life terms, having completed at least 20 years behind bars to qualify for clemency, including those convicted of murder that were initially excluded.

Mozambique: On 17 April, Club of Mozambique reported that the National Administration of Justice had just ordered the release of 250 prisoners serving sentences of less than one year from the Maputo Provincial Penitentiary under the Amnesty Law and presidential pardon initiative. Maputo Province Prison, the largest in the country, has 3,248 prisoners, of whom about half are expected to benefit from the pardon.

Botswana: On 17 April, Botswana pardoned and released 149 prisoners. 53 of the 149 were on extramural labor while 96 were incarcerated. Twenty of those released were reportedly foreign nationals and would be released when immigration procedures to send them home were concluded. It remained unclear as to what categories of crimes were pardoned and how long the prisoners had left of their sentences.

South Africa: By 8 May, two inmates had died while a total of 172 inmates and prison workers had tested positive for the Covid-19 across the country.

In line with Section 82(1)(a) of the Correctional Services Act of 1998, which empowers the president to authorise at any time the placement on correctional supervision or parole of any sentenced prisoner, subject to conditions that may be recommended by the Correctional Supervision and Parole Board, on 8 May President Ramaphosa authorised parole for just under 19,000 inmates, out of a population of 155,000, from areas that are at high risk of Covid-19.

According to the Presidency, the parole dispensation will apply to low-risk inmates who have passed their minimum detention period or will approach this period in the coming five years.

“This dispensation excludes inmates sentenced to life imprisonment or serving terms for specified other serious crimes, including sexual offences, murder and attempted murder, gender-based violence and child abuse. Parolees will serve the remainder of their sentences under Community Corrections.” The process is expected to take place over 10 weeks.

The plight of awaiting-trial prisoners

Action to prevent transmission of Covid-19 in detention centres remains worryingly limited. Detention facilities are particularly of concern as remand or awaiting-trial prisoners live in more congestion and sometimes squalor than convicted prisoners. It is near impossible for people in detention to achieve the required social distancing and access clean toilets, showers and sinks. Already, this population is being affected and by extension the community members who are exposed to them including prison staff. Sections 7 and 9 of the Constitution of South Africa provide that everyone is equal before the law and has the right to equal protection and benefit of the law, and that the state “must respect, protect, promote and fulfill the rights in the Bill of Rights”. Section 35 is specifically dedicated to the arrested, detained and accused persons and stipulates that every detained person, including a prisoner, has a right to conditions that are consistent with human dignity, including and at the State expense, provision of adequate accommodation, nutrition, medical treatment, among others.

Allegations received by the SAHRDN and shared with the Judicial Inspectorate for Correctional Services (JICS) for further investigations are that at Johannesburg Correctional Centre (called “Sun City”), a cell built for 36 inmates is allegedly currently housing more than 70 inmates and a minimum of three people are required to share a double bed. The ratio of over 70 inmates versus one toilet, one shower and one urinary facility makes it impossible to observe social distancing or to achieve any form of personal hygiene.

Awaiting-trial prisoners are forced to pay money ranging from R300 to R1,000 for them to access beds or decent/human treatment. Those that fail to pay are subjected to inhuman treatment including being forced to sleep in dirty and lice-infested old blankets that have not been washed for seasons.

Allegations of some unethical conduct by prison officials including selling essentials such as toilet paper, toothpaste, soap, shaving razors, blankets and medication, smuggling in cigarettes, snuff and other illegal and harmful substances have been raised by some inmates who prefer to remain anonymous for fear of victimisation. Many prisoners are sharing one cigarette, drastically increasing chances of Covid-19 transmission.

It is unfortunate that awaiting trial prisoners are not covered in the 19,000 to be released.

In Angola, by 27 April, authorities had reportedly released nearly 1,900 people in pretrial detention despite having no confirmed Covid-19 cases in prisons so far. Human Rights Watch however indicated that although the release of detainees will reduce prison overcrowding, it is not enough to avoid a health disaster, arguing that the country’s prisons are ill equipped to curb Covid-19 spread.

Cases of police brutality are on the rise in southern Africa as security agents continue to use force to enforce lockdown restrictions, despite the fact that the same restrictions allow people to go out for essential purposes like buying food and medication.

Rights groups have condemned the brutality meted on citizens, arguing that this leads to a daily influx of new detainees as police continue to detain and place hundreds of people in custody for low-level crimes. Human Rights Watch expressed concern that if not appropriately quarantined and monitored for Covid-19, these new arrivals could contribute to an outbreak in the prison system.

On 1 May, police in Angola released data showing that almost 300 people had been detained in 24 hours for violating state of emergency rules that Angola’s parliament extended to 10 May. Reports indicate that almost half of Angola’s prison population are detainees awaiting trial, with most of them being held for low-level offenses or have been kept in prison on fabricated charges such as for exercising their right to peaceful protest.

In South Africa, 2,289 people had been arrested by 1 April for allegedly failing to comply with National State of Disaster regulations. On 4 May, Times Live reported that at least 826 people had been arrested in KwaZulu-Natal for breaching lockdown regulations since the country downgraded to Level 4, while 130 people were arrested at eMbuzini informal settlement and at a nearby factory site in Orlando West, Soweto, in Gauteng. It was also reported that 126 undocumented foreign nationals had been arrested at the same site and would be detained by Home Affairs. South African police have indicated that they will continue arresting those found flouting regulations.

The C-19 People’s Coalition, a conglomeration of over 300 civil society organisations working in South Africa, released a statement on 5 May condemning the excessive use of force by the South African Police Service on citizens, stating that “the fear induced in people, particularly vulnerable groups, by this heavy-handedness has directly impacted the ability of many to access food, water, electricity, and other basic needs for survival”, adding that a variety of people’s basic rights are being violated. By 13 April, the Zimbabwe Republic Police had arrested 5,226 people across the country for allegedly running shebeens, committing traffic offences, operating businesses without exemption or “moving aimlessly” during lockdown.

People in prisons and other places of detention have turned out to be one category of severely vulnerable groups of people who largely have no control over their circumstances to be able to effectively carry out the measures recommended by the WHO in order to curtail the spread of Covid-19. They cannot physically distance, have no reliable supply of food and clean water. They have no personal protective equipment (PPEs) and are not capable of self-isolating. They do not have access to reliable medical facilities including testing. This converts prisons and places of detention including pre-trial detention into places that can undermine the fight against Covid-19 unless well thought out and planned decogenstion measures are immediately undertaken without compromising justice and accountability for crimes.

It is also clear that the current practice of arresting and detaining the poor who are scavenging for food only increases populations of people in prisons or detention centres at a time when courts are not functioning, thereby increasing prison/detainees’ population and exposure of the poor to Covid-19.

Arnold Tsunga is a human rights lawyer, the director of the Africa Regional Programme of the International Commission of Jurists (ICJ), and the Technical and Strategy Advisor of the SAHRDN. Tatenda Mazarura is a Woman Human Rights Defender (WHRD), a professional rapporteur, and an election expert. Mark Heywood is editor of Maverick Citizen

The last episode of "Exile Shall Not Silence Us" is here!
In episode #5, a human rights defender (#HRD) from #Egypt in exile in #Tunisia tells us about his experience, his hopes, and what he has been learning from Tunisian civil society.