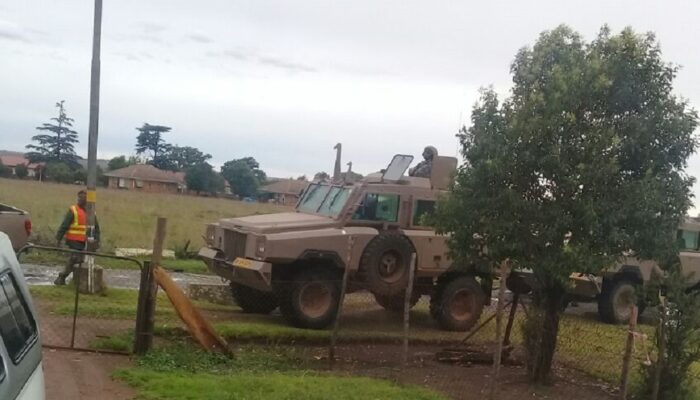 Posted at 08:54h in Southern Africa by Gentrix Barasa
Share

They have detailed the continued intimidation and harassment of the residents of Happiness village by the South African National Defence Force (SANDF).

“We have written to the Special Rapporteurs because the SANDF is unrelenting in its abuse of the resident’s despite the best efforts of their legal representatives and repeated court orders,”

“A community leader was placed under house arrest guarded by four soldiers for seven days. Another resident was subjected to a punishment by which was told to lie flat on the ground and ‘pray to his God’ for simply leaving his home. Others have been assaulted. The SANDF deliberately conducts military exercises near the residents’ homes late at night to scare and intimidate them. All this with utter disregard for the law and in direct violation of a number of court judgments and orders”,

The residents, who were forcibly and violently evicted from Marievale military base beginning in 2017, have repeatedly been granted court orders by the High Court declaring such evictions unlawful and directing the SANDF to refrain from harassing, threatening and intimidating the residents and not to restrict their movement.

Despite this, and in the midst of the COVID-19 pandemic, further evictions and constant harassment and intimidation continues unabated and has intensified to a point that the residents describe the SANDF as having “laid siege” to their homes in Happiness Village which is adjacent to Marievale military base.

Soldiers now police checkpoints, preventing visitors from entering the area and even journalists have been prevented from entering Happiness Village. The residents’ legal representatives were only allowed to visit a single community representative under armed military guard.

As the letter reveals, the SANDF’s actions amount to violations of the residents’ right to adequate housing protection in terms of the South African Constitution, the African Charter on Human and People’s Rights and the International Covenant on Economic, Social and Cultural Rights.

The intimidation, harassment, humiliation and assault of the residents’ amount to violations of the residents’ rights to liberty and security of person and may also amount to cruel, inhumane and degrading treatment or punishment in violation of the South African Constitution and international human rights law.

They seem to be geared at making the resident’s lives intolerable in order to secure evictions “through the backdoor”, which is explicitly prohibited in South African law.

The residents, represented by Lawyers for Human Rights, will once again be in urgent court on July 31 seeking an interdict to prevent further harassment, intimidation and restrictions on their movement by the SANDF. The legal representatives of the SANDF have indicated that they intend to oppose their application.

The SAHRDN and ICJ has therefore implored the Special Rapporteurs to: