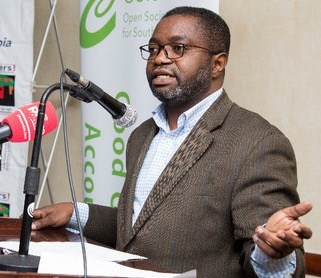 23 March, 2020
SAHRDN Calls on Authorities in Zambia to Stop Persecuting Human Rights Defenders and Demands Immediate Reinstatement of SC John Sangwa, a Prominent Lawyer Arbitrarily Barred from Appearing in Any Court of Law in Zambia

Posted at 11:38h in Southern Africa by Gentrix Barasa
Share

Southern Africa Human Rights Defenders Network (SAHRDN or the Defenders Network) calls on authorities in Zambia to stop persecuting human rights defenders (HRDs)and demands the immediate reinstatement of Mr. John Sangwa, a prominent lawyer in Zambia who was barred from appearing in any court of law in Zambia.  In a letter dated 13th March 2020, the Acting Chief Registrar and Director of Court Operations, Prince Boniface Mwiinga instructed judges, magistrates and registrars that “Mr. John Sangwa, SC, an Advocate of the High Court, practising under the firm of Simeza, Sangwa and Associates will no longer be allowed to appear before any Court in Zambia until further notice”. The letter stated that his suspension was a result of a complaint of professional misconduct which was made by the  Judiciary of Zambia to the Law Association/society. The details of the alleged complaints by the judiciary against Mr. John Sangwa were not disclosed.

“This kind of targeted victimisation and persecution of a frontline Human Rights Defender and a constitutional lawyer has no place in a democratic society especially coming from the judiciary, an institution that has a constitutional duty to protect human rights and the rule of law,” said Kaajal Ramjathan-Keogh the Executive Director of the Southern Africa Litigation Centre (SALC) and SAHRDN board member. “It is an attack on the independence legal profession and puts the Judiciary of Zambia into unnecessary potential disrepute” added Kaajal.

SAHRDN has observed signs of systematic repression, attacks on human rights defenders and closure of civic space especially in the face of the general elections constitutionally scheduled for August 2021. The arbitrary arrest of Fumba Chuma  (Pilato) in December 2019 in respect of which there has not been a formal charge or court appearance is an example of one such concern. Pilato was initially accused of unlawful assembly for holding and accountability meeting with the youths in Livingstone under the program Be Heard Zambia. Despite attending Livingstone police station several times after his arrest to enquire about his case, he has never been formally charged. Laura Miti and Bornwell Mwewa, well known HRDs  were also subsequently arrested for showing solidarity to Pilato in December 2019 and were falsely charged of assaulting the police and being disorderly in public.

SC John Sangwa has been a strong and consistent public critic on the efforts to amend the Constitution of Zambia in a way that entrenches strong presidency, undermines the separation of powers and judicial independence. He has also opposed the efforts to get the current President to stand again as a candidate in the upcoming elections. It is not an offense to comment or correct the officials in interpreting the Constitution, every Zambia should be allowed to defend their Constitution as stated under section 2 (a) and (b) of the Constitution of Zambia. He now faces persecution for his views. The increase in judicial persecution of HRDs points to the unjustified limitations on the rights to freedom of expression, association, and assembly in Zambia which in itself is both a threat to democracy and a democracy reversal.

“The persecution of human rights defenders or people who constructively criticize the government seems to be becoming a norm rather than an exception in Zambia. Persecution of human rights defenders through arbitrary arrests,  detentions, and delegitimization through trumped-up charges and character assassination needs to stop” said Lepeli Moeketsi, another Board Member of SHARDN and Human Rights Officer with Lesotho’s Transformation Resource Centre.

Zambia is a party to many international human rights instruments that obligate the State to protect the rights to freedoms of expression, association, and assembly, such as the International Covenant on Civil and Political Rights and the African Charter on Human and Peoples Rights. We urge the authorities in Zambia to respect their own constitution and the regional and international human rights treaties which Zambia is part to.

SAHRDN calls on the removal of the ban on Mr. John Sangwa so that he is able to appear before the courts and execute his duties as a defender of the rule of law and advocate of democracy. We also urge the members of the Law Association of Zambia to continue advocating and fighting for the independence of the judiciary.  We call on the government of Zambia to respect the doctrine of separation of powers which is the pillar of democracy. The Judiciary of Zambia should give Mr. Sangwa his practicing license and allow him to continue his work as an officer of justice.