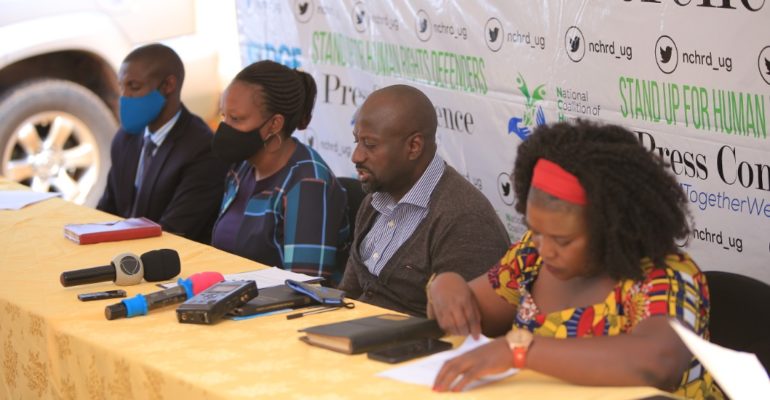 Posted at 11:20h in East & Horn of Africa by Gentrix Barasa
Share

Uganda: Urgent call to fully constitute the NHRI by the appointing of a substantive Chairperson of the Uganda Human Rights Commission in face of worrying attacks to fundamental human rights and freedoms of Human Rights Defenders.

(Kampala / November 17th, 2020) The National Coalition of Human Rights Defenders in Uganda (NCHRD-U) notes with concern the heightened political environment and the emerging human rights abuses and violations in the face of the 2021 general elections. As the campaigns gather momentum, we note a series of sustained rights abuses and violations that require the immediate intervention of state bodies like the Uganda Human Rights Commission.

Colleagues, we need to retaliate the need for all citizens to cautiously adhere to the SOPs set forth to prevent the spread of COVID -19 by the Ministry of Health-it is important because COVID-19 is real and a danger to all of us. Electoral processes are very fundamental for any democracy and participation and fairness of the process is a critical tenet.

We invited you here today, to address you on emerging human rights concerns and developments that need urgent and specific attention by all actors be it state or non-state; This is part of our core responsibility and duty bestowed to us by the Constitution under Article 38-The right to participate in the affairs of government including participation in peaceful activities aimed at influencing the policies of government through our civic organisations.

To borrow Congressman John Lewis (RIP) words: When you see something that is not right, not just, not fair, you have a moral obligation to say something, to do something,” John Lewis 1940-2020 Conscience of a nation.

However, with the different Presidential candidates beginning their campaigns, the initial campaign days have been characterised by cases of indiscriminate violence and fragrant disregard of COVID-19 Ministry of Health Guidelines. These scenes have in one way or another got human rights defenders entrapped such as election observers and Journalists.

Since our last address to the press on the 25th September, there is a sustained pattern of attacks on environmental rights defenders. According Ugandan activists and two French NGOs, tens of thousands of people in Uganda have been harmed by human rights violations linked to Total’s oil operations in Uganda. Total intimidated and failed to properly institute environmental safeguards and their projects disrupted access to education and healthcare, according to the activists who are seeking a court order for Total to disclose how it is addressing the alleged adverse impact of its activities .

In December,2020 we will be launching our research study on Human Rights Defenders working in the context of the oil and extractives sector that highlights the emerging trends of attacks toward Environmental rights defenders in Uganda.

HRDs’ right to assembly continues to come under attack with the brutal arrest of Woman Human Rights Defender Nana Mbarikiwa and two other activists on 21st October,2020 at Kira Police Station. The activists were holding a peaceful protest to condemn the escalation in police brutality. On 22 October,2020 the hashtag #EndPoliceBrutalityInUganda was trending on Twitter , with most users pointing towards recent incidents of police violence against protesters and opposition supporters.

Freedom of expression and peaceful assembly in electoral contests in Uganda continued to come under pressure as noticed in the start of the official campaign period. On 2nd November 2020, operatives of security agencies were seen hauling teargas canisters at well-branded media vehicles that were covering events following the arrests of Presidential Candidate Nominee Hon Robert Kyagulanyi Sentamu. Seen as a direct attack targeting media houses. Similarly, in the wee hours of the morning of the 13th November, journalists attached to NBS television were targeted by unknown persons and their vehicle vandalized as they covered rallies in Lira. In the attack, journalists led by Daniel Lutaaya allegedly lost a laptop, Video Camera and other accessories to the mob.

On 12th November 2020, a Bukedde Journalist Tony Lule was arrested by plain-clothed security operatives at the Vision Group premises on allegations of running a Facebook post that carried an attack on the person of the first son Gen.Muhoozi Kainerugaba and is currently held at Kireka beyond the lawful detention hours. Free flow of information is critical to any democratic society, and especially so in an electoral context.

As of today, the NHRI known as the Uganda Human Rights Commission remains without a substantive Chairperson and other members. The Uganda Human Rights Commission (UHRC) was established under the provisions of Article 51(1) of the 1995 Constitution of the Republic of Uganda to promote and protect human rights and freedoms in the country. Its functions and powers were operationalised under the Uganda Human Rights Act of 1997. It practically means that the Commission in its current state cannot make a decision or make use of its constitutional powers to address human rights issues because it is not fully constituted to do so and any purported decisions it makes as of now can be successfully challenged as lacking in law.

1. Urgently appoint the substantive Chairperson and other members to the Uganda Human Rights Commission to enable a fully constituted commission to undertake its lawful mandate of protecting and promoting human rights in the country.

To the Uganda Police Force (UPF)

2 Apply the 2019 UPF human rights policy in undertaking your work and avoid the excessive use of force, unnecessary brutality, arbitrary arrests, incommunicado detention, and attacks on journalists and other HRDs who monitor and report on human rights issues during the electoral cycle.

3. We urge and call upon Parliament to expeditiously debate and pass the Human Rights Defenders law to explicitly recognise the legitimate work of Human rights defenders in Uganda

4 Call for prompt, thorough, independent and impartial investigations into all allegations of human rights abuses and violations by state actors.

To the Electoral Commission (EC):

1. Facilitate CSO engagement in the Electoral process through fast tracking the accreditation process for electoral observers and monitors.

2. Engage security agencies and facilitate dialogues with the leadership of Joint security teams and political actors to forestall highhandedness of elements within the forces during the electoral processes.
3. Take action against political actors who fragrantly disregard application of COVID-19 SOPS and Guidelines while in the field.

To all political actors and citizens involved in campaigns:

5. Adhere to the laws and guidelines issued by Electoral Commission and more so SOPs relating to combating the spread of Covid 19 pandemic amongst the population. Avoid physical confrontations, insults and abuses towards law enforcement agencies at all times. Conduct and carry out peaceful campaigns at all times.

For God and my Country

It is 7 years today since Osman Hummaida- a brave Sudanese #HRD passed away. We celebrate his life that he dedicated to defend human rights. @Hassan_shire @AfricaDefenders @AfricanCentre

#Egypt: We call on the authorities to ensure prompt, transparent & effective investigations into #AhmedSamirSantawy’s allegations of being subjected to enforced disappearance & ill-treatment by security forces following his arrest.
#FreeAhmedSamir
https://cihrs.org/egypt-74-ngos-urge-egyptian-authorities-to-release-researcher-ahmed-samir-santawy/?lang=en

#Egypt: After the release of #solafamagdy and #HossamSayad, the Cairo Institute for Human Rights Studies renews its demand for the release of all detained journalists, including; Mohamed Salah, Israa Abdel Fattah, Ahmed Mohamed Khalifa, Hani Greisha and Hossam Moanis. https://twitter.com/CIHRS_Alerts/status/1382372878100877312