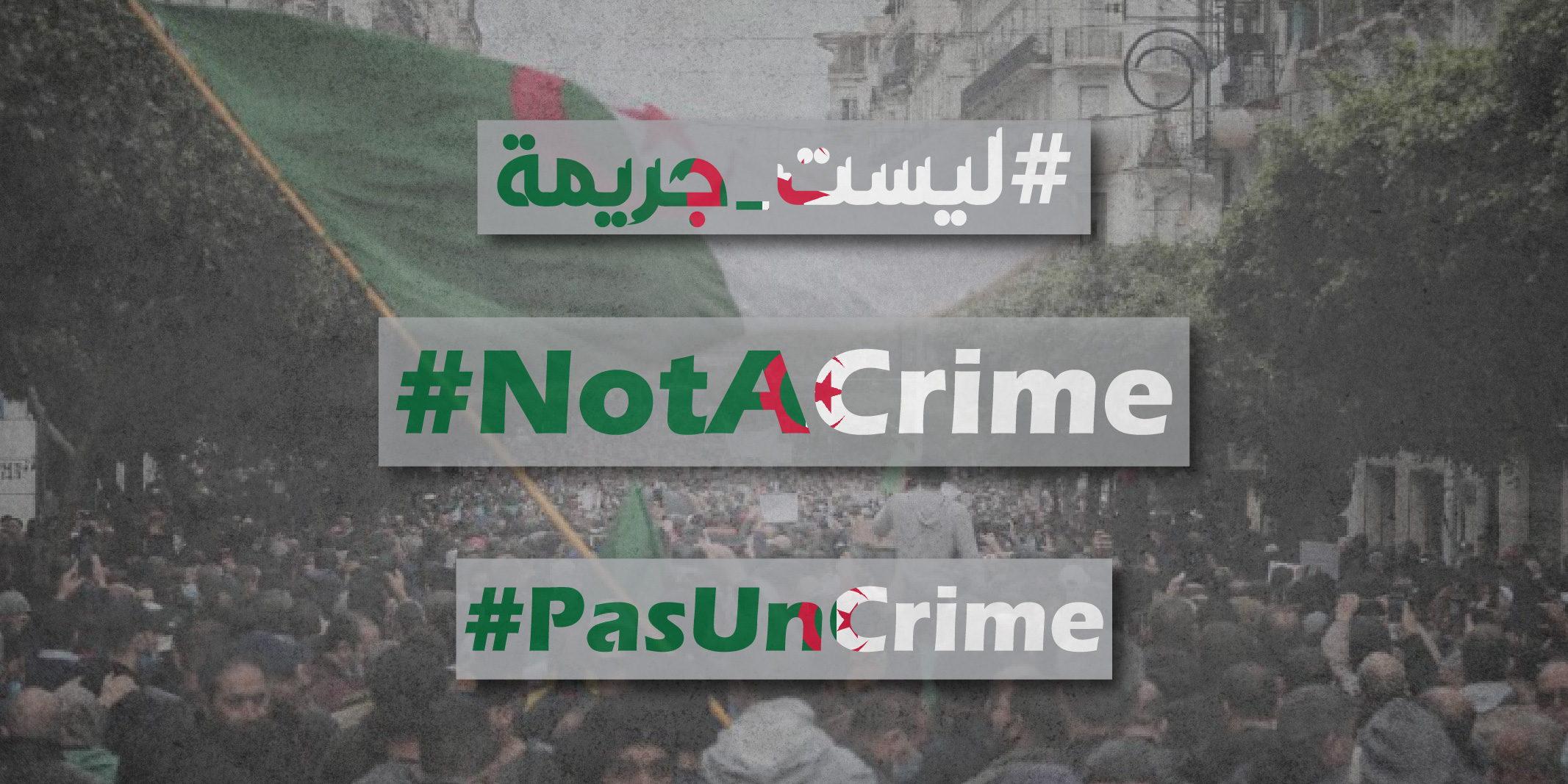 19 May, 2022
#NotACrime: Algeria end the repression of fundamental freedoms and assault on civic space

Posted at 12:57h in AfricanDefenders by Gentrix Barasa
Share

A year ago, Algerian authorities shut down the “Hirak” pro-democracy protests in most of the country. Since then, the number of unfounded terrorism prosecutions has soared, problematic amendments to the Penal Code were adopted, legal actions were initiated against civil society organisations and opposition political parties, and the crackdown on human rights defenders and the media has intensified, while authorities have continued to obstruct independent unions’ registration and activity.

#NotACrime is an online campaign aiming to draw attention to the ways in which Algerian authorities have increasingly attempted to stifle dissenting voices and independent civil society. Launched by 38 Algerian, regional and international organisations, the campaign will be conducted between 19-28 May on the organisations’ respective social media accounts.

The campaign calls on Algerian authorities to end their repression of human rights, immediately and unconditionally release those detained solely for the peaceful  exercise of their human rights and allow everyone to freely enjoy their rights. Those suspected of responsibility for grave human rights violations should be brought to justice in fair trials, and the authorities should provide access to justice and effective remedies for victims. The campaign calls on all individuals, organisations and relevant parties to contribute in collectively demanding an end to the criminalisation of the exercise of fundamental freedoms in Algeria, using the #NotACrime hashtag.

At least 300 people have been arrested since the beginning of 2022 (as of 17 April) for exercising their right to free expression, peaceful assembly or association, according to Zaki Hannache, a human rights defender, though some have since been released. Arrests and sentencing of peaceful activists, independent trade unionists, journalists and human rights defenders have continued unabated, even after the protest movement was shut down. Algerians jailed for their speech have repeatedly carried out hunger strikes – El Hadi Lassouli since 3 May for instance – above all to protest their arbitrary imprisonment. According to the Algerian League for the Defense of Human Rights (LADDH), these figures underrepresent reality because many cases are not communicated due to fear of reprisal.

The death in detention of Hakim Debbazi on 24 April, after he was placed in pretrial detention on 22 February for social media postings, shows what is at stake when people are detained simply for exercising their human rights.

While international scrutiny has remained scarce, the UN High Commissioner for Human Rights Michelle Bachelet, in her update to the Human Rights Council on 8 March 2022 , expressed concern over “increasing restrictions on fundamental freedoms” in Algeria and called on the government “to change course.” Ahead of the examination of Algeria’s human rights record in November by the UN Human Rights Council, within the Universal Periodic Review process, the undersigned organisations express serious concern and hold Algerian authorities responsible for the dangerous backsliding in Algeria, notably in the rights to express one’s opinion, assemble and associate peacefully, and share and access information.

The campaign will extend until the anniversary of the death of Kamel Eddine Fekhar, a human rights defender who died in detention on 28 May 2019 after a 50-day hunger strike to protest his imprisonment for expressing views critical of the government. He had been charged with undermining state security and inciting racial hatred. On 11 December 2016, a British-Algerian journalist, Mohamed Tamalt, also died in custody following a hunger strike during his imprisonment for Facebook posts deemed offensive by the authorities. Algerian authorities have failed to adequately investigate both of their deaths.

Exercising the fundamental freedoms of peaceful assembly, association and expression, and defending human rights is #NotACrime.