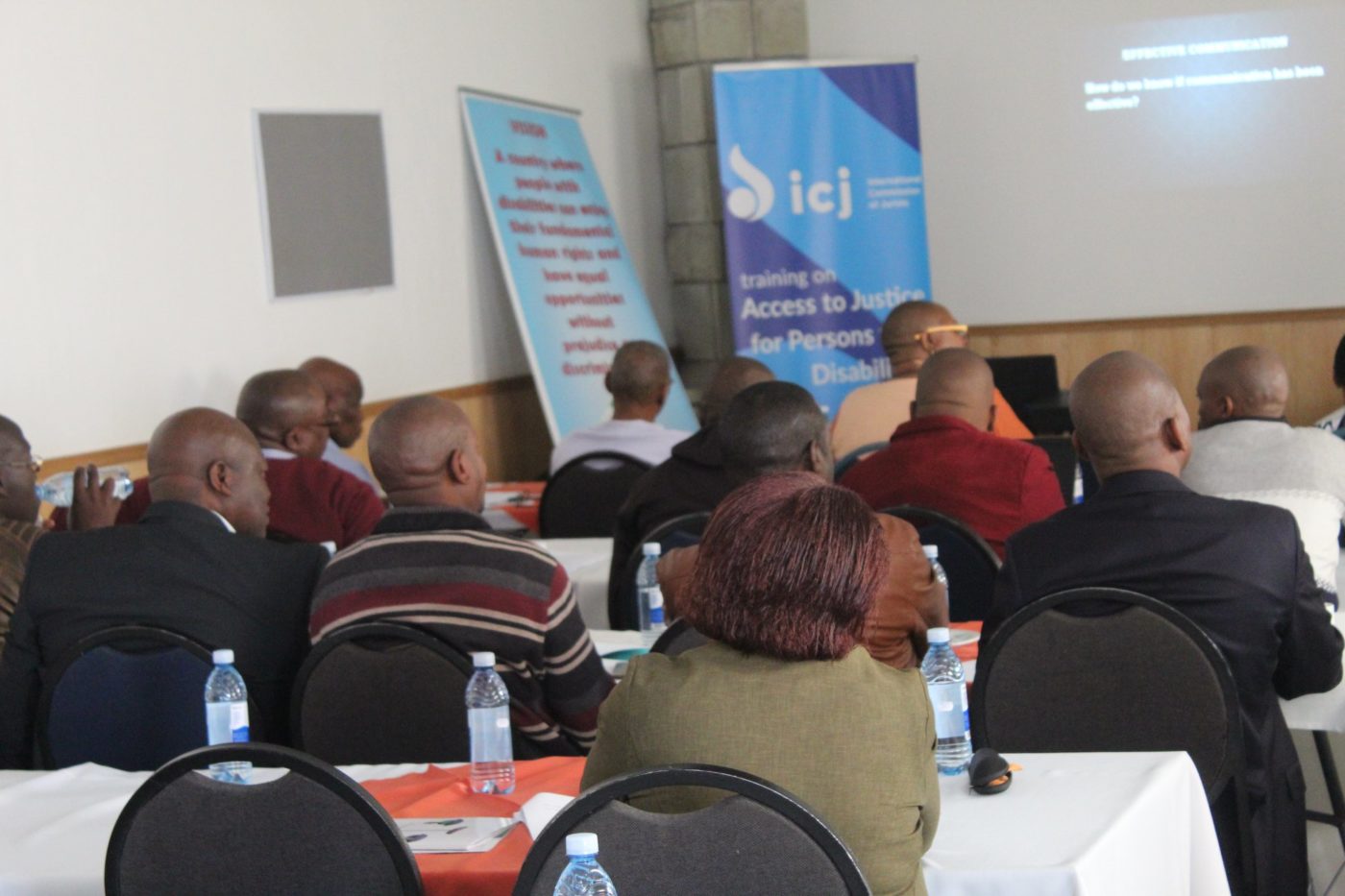 Posted at 10:54h in Southern Africa by Gentrix Barasa
Share

At the workshop, the ICJ Legal Adviser Associate Nokhukanya Farise discussed on the UN international legal framework on access to justice for persons with disabilities at both the universal and regional levels. In this regard, the ICJ highlighted provisions related to access to justice of the International Convention on the Rights of Persons with Disabilities (CRPD), as well as the Protocol to the African Charter on Human and Peoples’ Rights on the Rights of Persons with Disabilities in Africa.

These instruments provide for a substantive right to access to justice for persons with disabilities under article 13.

In addition, they expand on the rights to non-discrimination and equality of persons with disabilities, as well as their right to equality and access to the physical environment, facilities, services and infrastructure required under article 9 of the CRPD.

Justice Charles Mkandawire of the High Court of Malawi and ICJ Commissioner, who attended the workshop and facilitated a session on the role of the judiciary, said: “The judiciary should be functional independently of the executive and legislature, and the relationship between all three should be characterised by mutual respect. The judiciary should also be impartial and independent to prevent the abuse of power.”

Lnfod has been actively working to secure access to justice for persons with disabilities in the criminal justice system of Lesotho. In the workshop, independent law and policy expert Dianah Msipa discussed the case of Koali Moshoeshoe and Others v DPP and Others, where Lnfod successfully challenged the constitutionality of Section 219 of the Criminal Procedure & Evidence Act No.9 of 1981 in the High Court (Constitutional Division).

That provides that persons with intellectual/psychosocial disabilities are not competent witnesses, denying them equal access to justice.

Lnfod explained the Court’s ruling that the legal barrier violated the right to equality before the law and was discriminatory on the basis of disability. It also disproportionately affected women and girls with intellectual and psychosocial disabilities as this rendered them vulnerable sexual abuse.

Lnfod indicated it hoped that the Koali Moshoeshoe case would act as a reformative judicial precedent which will be disseminated and implemented by the courts of law across the country.

“The shift towards the realization of the right to legal capacity for persons with intellectual/psychosocial presents a remarkable opportunity towards overall enjoyment of all the rights provided for in the United Nations Convention on the Rights of Persons with Disabilities on an equal basis with others,” Lnfod said in a statement delivered before the workshop.

At the workshop, independent disability law and policy expert Dianah Msipa explored the issues of understanding disability, the rights of access to justice for persons with disabilities, barriers to effective participation in the criminal justice system, and the use of accommodations in access to justice.

“The training was well-received by all the delegates and I am encouraged by the word of the delegates who stated that they would start providing accommodations to persons with disabilities,” Dianah Msipa said.