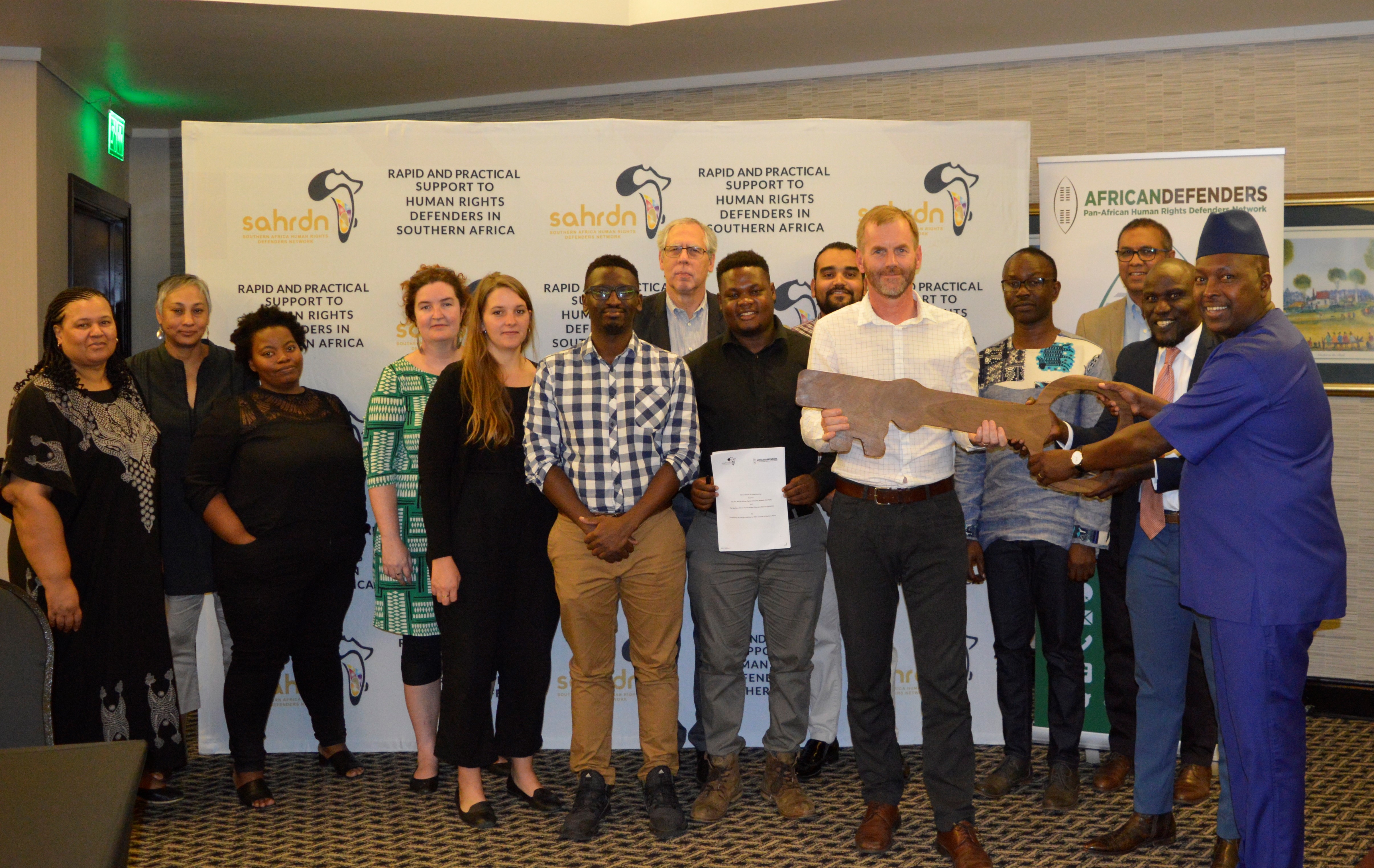 14 February, 2019
Launch of Ubuntu Hub Cities for the protection of HRDs

Posted at 07:13h in Southern Africa by Cristina Orsini
Share

The Southern African Human Rights Defenders Network (SAHRDN) is a sub-regional network that works to protect and promote the rights of HRDS within the sub-region of Southern Africa. It offers rapid and practical support to HRDs facing persecution in Southern Africa. It is a member of the Pan Africa Human Rights Defenders Network (PAHRDN) that coordinates and coheres the work across the African continent of protecting HRDs facing persecution for their work as HRDs. SAHRDN is proud of this association.

Today marks the culmination of what started in earnest when Hassan Shire, DIRCO’s Bra Pitso and I had a brainstorming session in Geneva a few years ago and recognised that we already had hubs in Africa where HRDs go to for protection when faced with persecution but just needed a project that recognised this reality. It was also recognised at this brainstorming session that the reason why these were already safe zones was because of the Ubuntu value and principle that made people in Africa instinctively want to look after each other during times of difficulties as a natural socialisation process on the continent.

Allow me to use the example of the current crisis in Zimbabwe to illustrate why the Ubuntu Hub Cities (UHCs) for protection of HRDs is so important.

The beginning of the year, saw President Mnangagwa announcing an 150% price increase in fuel prices. The Zimbabwean Congress of Trade Unions (ZCTU) and a prominent human rights defender (HRD), Pastor Evan Mawarire, called for a three-day strike starting on Monday, 14 January 2019, against the increases of fuel price and worsening economic conditions.

Faced with serious protests the government of Zimbabwe (GoZ) committed violations of basic human rights of its people such as blocking the Internet, including social media; deploying the army, the police and security agents in high-density suburbs of the major cities in Zimbabwe, where they opened fire on protesters and randomly carried out door-to-door raids through forced entry, by breaking down doors and windows. Further the GoZ, through its security minister, blamed civil society, pressure groups and the main opposition political party, the Movement for Democratic Change, for orchestrating the protests for regime change.

Many HRDs, democracy activists, legitimate political opponents and their families faced persecution including torture, arbitrary arrests and detentions and summary mass trials without effective legal representation. Pre-trial fair trial guarantees provided for under the Zimbabwe constitution and international human rights instruments that Zimbabwe has signed and ratified were not respected with bail generally denied as a routine. The conviction rate was unusually high and long prison sentences were meted out.

The weaponisation of the law as an instrument of persecution resulted in the members of the Law Society of Zimbabwe taking the unusual action of publicly demonstrating. Given this sad turn of events, the SAHRDN was inundated with requests for protection by HRDs from Zimbabwe

The SAHRDN received more than 40 applications from the Zimbabwean HRDs requesting assistance in the form of accommodation, transport and subsistence inside and outside Zimbabwe. The countries of destination for HRDs fleeing Zimbabwe, have so far been South Africa (over 95%); Namibia, Botswana, Zambia and Kenya. Many of them need a long-term grant that can extend to at least a month until the danger passes. The applicants range from civil society leaders, councilors, Member of Parliaments, student leadership organizations, pressure groups as well as political opposition members. Everyday more and more applications come in.

We are doing our best to give the best support to them but we are however struggling due to limited funds and resources. Many of the situations require urgent attention.

As of today we can confirm that we have assisted about 24 HRDs with external and internal temporary relocations, with ages ranging from 24 years up to 65 years old. The total number of males assisted is 20 and for females it is 4. Regrettably we have turned down a number of applications that are deserving simply because we cannot afford to help everyone in need.

Total number of assisted HRDs where Internal or External

Type of Human Rights Defenders that we have assisted

We are still figuring ways of assisting the others. The main threats that the human rights defenders having been facing and are still facing include, abductions, torture, judicial persecution and arbitrary arrests. The mapping by the security sector of where the HRDs reside has been done with precision and the HRDs are unable to sleep at their homes due to nocturnal raids.

In conclusion we anticipate 2019 to be a busy year for the network as the continent of Africa is faced with more than 20 elections. Election cycles are a trigger of general persecution and targeting of HRDs because regrettably in many countries power is seen as an end in itself and therefore at any cost.  In the sub region of Southern Africa six elections are to be held this year. According to Electoral Institute for Sustainable Democracy in Africa (EISA), the following Southern African Countries will conduct elections this year

This means a lot of Human rights defenders will require protection. We therefore cannot emphasize enough the urgent need of the Ubuntu Hubs Cities for protection of HRDs. I thank Jacob van Garderen for representing the SAHRDN so ably in processes with PAHRDN colleagues that have lead to this launch. Thank you very much indeed!