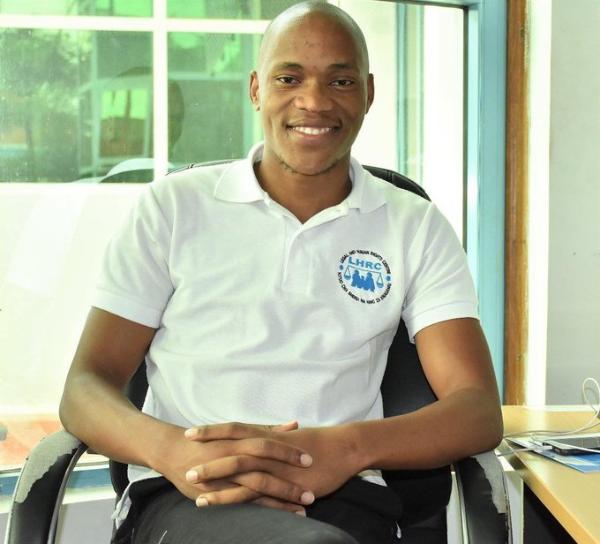 Posted at 07:38h in East & Horn of Africa by Gentrix Barasa
Share

Re: Urgent Request for Intervention in the Case of Human Rights Defender, Tito Elia Magoti.

We, the undersigned civil society organizations (CSOs) working to promote and defend human rights across the globe, including in Tanzania, urgently write requesting your intervention in the arrest and detention of human rights defender, Tito Elia Magoti. We are not only concerned that his arrest and detention is in retaliation for his legitimate human rights work but that the manner of his arrest, indicates a pattern by the State of disregarding due process procedures. We are further concerned that the charges against him, more specifically that of “money laundering” which automatically denies him the right to bail under Tanzanian law, poses an existential threat to all human rights defenders, journalists and civil society in Tanzania. Those charged under this law, regardless of the frivolousness of the allegations, can be indefinitely detained without trial.

On December 20, 2019, Mr. Tito Magoti, a young lawyer and Program Officer with the Legal and Human Rights Center (LHRC), was reportedly abducted by four unidentified men, handcuffed and driven off in what seemed to be a civilian vehicle.[1] LHRC is a Tanzanian based organization that works to promote, reinforce and safeguard human rights and good governance in the country.[2] Members of  LHRC and other human rights organizations frantically visited various police stations in search of Mr. Magoti but were unable to locate him. It was feared he had been abducted. In the evening of December 20, 2019, the Dar es Salaam Zone Police Commander, SACP Lazaro Mambosasa, eventually released a press report indicating that he had not been abducted but was in police custody with several other arrested individuals.[3] No mention was made of where he was being detained or what allegations he was facing.[4] Police Commander Mambosasa’s statement was subsequently contradicted by the Regional Police Commander for Kinondoni region, where Mr. Magoti was arrested, alleging that he had no knowledge of the arrest.[5]

On December 23, 2019, having failed to locate their employee, LHRC filed an urgent petition against the Dar es Salaam Special Zone Police Commander and the Attorney General demanding the release of Mr. Magoti whose whereabouts and charges against him had yet to be divulged.[6] It is only after this application was made that Mr. Magoti together with his colleague, Mr. Theodory Faustin Giyan, a software developer and commentator of matters of public interest, were brought before the Kisutu Resident Magistrate Court in Dar es Salaam, on December 24, 2019, and jointly charged with (i) leading an organized crime; (ii) possession of a computer program designed for the purpose of committing an offence; and (iii) money laundering. (The charges are attached as Annexure “A”)

We are gravely concerned with the manner of arrest and detention of Mr. Magoti. Regional and international human rights standards are clear that an accused person has the right to be immediately informed of the reason for his arrest; the immediate right to legal representation; and the right to inform his family of his arrest; and where he is being detained.[7] The State also has a legal obligation  to present an accused before a court of law within 48 hours of arrest.[8] Mr. Magoti’s arrest by unidentified men who subsequently held him in incommunicado detention for four days was not only a violation of his due process rights, but such practices raise the risk of cruel and inhuman treatment or torture while in custody as well as disappearances.[9] (The Tanganyika Law Society’s statement clearly outlining the failure of the Tanzanian government to respect due process procedures in the arrest of Mr. Magoti is attached as Annexure “B”)

There have been numerous reported cases of abductions in Tanzania including those of prominent government critics.[10] In July 2019, investigative journalist, Erick Kabendera was forcefully removed from his home by unidentified men who claimed to be the police.[11] Similarly, for several days, his family and lawyers did not know where he was being detained as he was moved from station to station and denied access to his lawyers.[12] In November 2017, investigative journalist, Azory Gwanda disappeared under suspicious circumstances and has not been seen since.[13] Given this environment, it is of paramount importance that the Tanzanian government when arresting citizens refrain from abductions by the police and respect fundamental due process procedures recognized under its own constitution and regional and international standards.

We strongly believe that the allegations against Mr. Magoti are in retaliation for his legitimate human rights work. During Mr. Magoti’s unlawful detention, he was reportedly questioned for his use of social media (Twitter) and his association with media owner and activist Maria Sarungi-Tsehai; former Tanganyika Law Society President Fatma Karume; and opposition politician Zitto Kabwe, all of whom are vocal critics of the Tanzanian government, and are all currently facing various forms of retaliation for demanding government accountability and transparency.[14] We are even more concerned with the specific charges of “money laundering” against Mr. Magoti and his colleague. According to the charges, the joint accused, between February 1, 2019 and December 17, 2019, “willfully organized a criminal racket namely possession of a computer program that is designed for the purpose of committing an offence, thereby acquiring a sum of money amounting to Tanzanian Shillings, Seventeen Million, Three Hundred Fifty-Four Thousand, Five Hundred Thirty-Five only”. It is further alleged that the accused acquired the above sum knowing that the money was proceeds of a predicate offense, namely “leading organized crime” and as such charged with “money laundering” under the Anti-Money Laundering Act as read with the Economic and Organized Crimes Control Act.[15] Under Tanzanian laws, money laundering which is an economic crime is a non-bailable offence.[16] As such, Mr. Magoti is not entitled to bail and the resident magistrate postponed his case to January 7, 2020.[17] His case was again postponed to January 24, 2020 for further investigation.[18]

Erick Kabendera mentioned above, who was also charged with “money laundering”, has been in detention since his arrest in July 2019, with his case being postponed at least 10 times while the prosecution “carries out investigations”.[19] Individuals charged with non-bailable offences have reportedly spent months and even years in detention without trial.[20] We fear that Mr. Magoti and his colleague can be held in pretrial detention indefinitely. A fundamental principle of any criminal justice system is the presumption of innocence which dictates that an accused person is innocent until proven guilty by a competent and independent court. The right to pre-trial release is recognized under regional and international law which dictates that as a general rule, bail should be granted and only in certain circumstances denied. Each case must be judged on its own merits with courts taking into consideration factors such as (1) the seriousness of the alleged crime (2) whether there is overwhelming evidence against the accused (3) possibility of the accused interfering with witnesses and evidence; and (4) where the accused poses a flight risk or is a danger to the community if granted bail.[21] Even then courts must strive to put conditions that favour the liberty of an accused in order to minimize the risk of an innocent person serving a sentence prior to conviction. Tanzania’s blanket denial of bail for certain crimes without individual assessment of each case is thus inconsistent with international standards.

There is an undeniable clampdown of civil society in Tanzania. Organizations have documented the “unwarranted closure of media outlets, judicial persecution and harassment of independent journalists, the targeted assassination of opposition party members, blanket restrictions on peaceful protests and the introduction and invocation of a raft of laws to undermine freedom of online speech”.[22] It is our deep fear that the arrest of Mr. Magoti and his colleague are but one of many cases of the continued targeting of government critics. We are additionally concerned with the developing pattern of charging government critics with the crime of “money laundering” thereby denying them the right to bail and condemning them to indefinite prison sentences.

Civil society especially human rights defenders play an important role in promoting and protecting the rights recognized under international human rights treaties, and help ensure that States respect economic, social, cultural, civil and political rights. The United Nations Declaration on the Rights and Responsibilities of Individuals, Groups and Organs of Society to Promote and Protect Universally Recognized Human Rights and Fundamental Freedoms (Declaration on Human Rights Defenders)[23] specifically recognizes the right that everyone, including human rights defenders, have to “discuss, form and hold opinions on the observance … of all human rights … and, through these and other appropriate means, to draw public attention to these matters…”[24] The government of Tanzania has an obligation to create a conducive environment where civil society can contribute to the development of Tanzania which involves holding the government transparent and accountable. Under international law, no one shall be arrested for exercising their fundamental rights and if so, that arrest is arbitrary.[25] It is deeply troubling when the criminal justice system is being used in such a manner. If left unchecked, this is a very dangerous practice that threatens civil society and the very fabric of Tanzania’s democracy.

In light of the above, we respectfully request that your offices urgently intervene in the case of Tito Magoti and other human rights defenders and journalists in Tanzania, who are facing criminal prosecution for exercising their fundamental rights and urge the government to immediately drop these charges. We also urge that you strongly remind the government to ensure that all citizens, from the moment of their arrest for any crime, are afforded the full due process of the law without derogation.

United Nations Special Rapporteur on the Independence of Judges and Lawyers.

United Nations Special Rapporteur on Promotion and Protection of the Right to Freedom of Opinion and Expression.