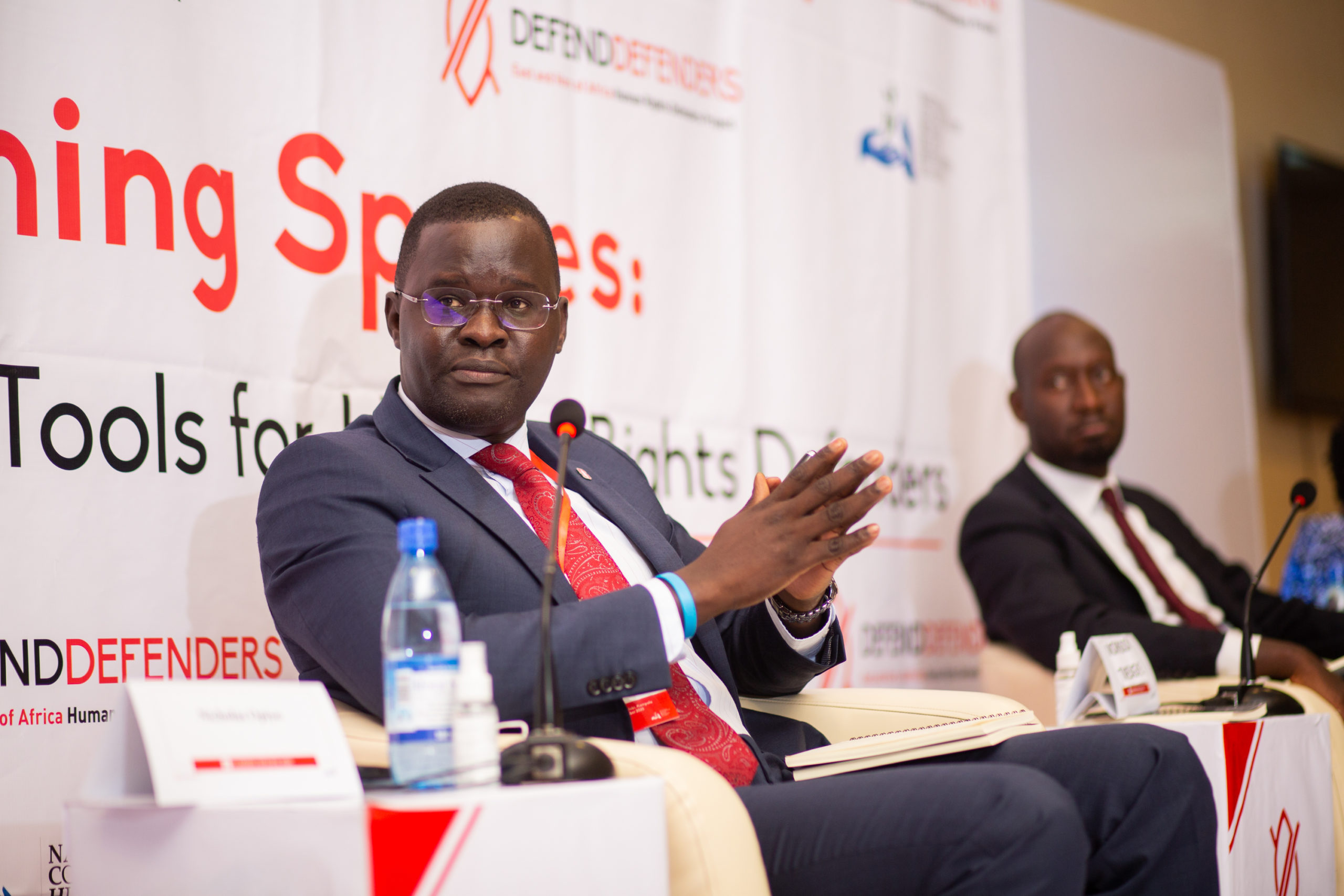 Posted at 12:17h in AfricanDefenders by Gentrix Barasa
Share

We, the undersigned non-governmental organizations and individuals are deeply concerned with the reports of the arrest of lawyers Nicholas Opiyo, Herbert Dakasi, Esomu Obure, Anthony Odur and human rights officer, Hamid Tenywa on 22 December 2020. Eyewitnesses report that Mr. Opiyo and the others were handcuffed before being speedily driven off in an unmarked van with tinted windows. Since their arrest, they have been detained with no access to their lawyers, family members or colleagues.

The manner in which they were arrested was tantamount to an abduction, which combined with their ongoing incommunicado detention, is a violation of recognized due process rights under national, regional and international law.

The Uganda Police Force has since confirmed that Mr. Opiyo was arrested by a Joint Task Team of Security and Financial Intelligence Authority, on allegations of money laundering and related malicious acts. The Uganda Law Society has since confirmed that together with the others, Mr. Opiyo is detained at the police Special Investigations Division in Kireka, a town in central Uganda. The authorities, however, continue to deny them access to their legal representatives and to inform the public on the nature of allegations against the others.

The International Covenant on Civil and Political Rights, as well as the African Charter on Human and People’s Rights, guarantee at a minimum, all arrested persons fundamental due process rights, including the rights to be immediately informed of the reason of the arrest; immediate access to a legal practitioner of one’s choice and the right to be promptly produced before a court of law.The ongoing incommunicado detention of the above-named individuals is thus a violation of Uganda’s regional and international human rights obligations.

The arrests of Mr. Opiyo and his colleagues come at a time when several organizations including the African Commission on Human and Peoples’ Rights have raised concerns over the pre-election environment in Uganda, which has been characterized by increased restrictions on civic space. This has included arbitrary arrests, excessive use of force and restrictions on the exercise of freedom of peaceful assembly, association and expression.

Most recently, the Financial Intelligence Authority ordered the freezing of bank accounts held by several non- government organizations, accusing them of financing terrorism. These acts amount to intimidation and delegitimization of non-governmental organizations, particularly those working on human rights and promoting good governance.

We remind the government of Uganda of the important role of civil society organizations in contributing to and sustaining a robust democracy. In particular, lawyers play a crucial role in protecting the human rights of vulnerable groups, holding governments accountable and ensuring respect for rule of law.

The United Nations Basic Principles on the Role of Lawyers are clear in that “[g]overnments shall ensure that lawyers are able to perform all their professional functions without intimidation, hindrance, harassment or improper interference”. Furthermore, “[l]awyers like other citizens are entitled to freedom of expression, belief and association… and to take part in matters of public discussion concerning the law, the administration of justice and the promotion and protection of human rights”.

In light of the above, we call on the government of Uganda to: