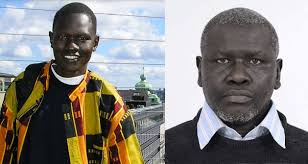 3 May, 2019
It is time for accountability for the enforced disappearance of Samuel Dong and Aggrey Idri

Posted at 14:04h in AfricanDefenders, East & Horn of Africa by Cristina Orsini
Share

As the news of the death of Samuel Dong Luak and Aggrey Ezboni Idri circulated this week, I felt extremely saddened and increasingly concerned about the region we live in. The enforced disappearance and extrajudicial killing of two outspoken critics of the South Sudanese government, by South Sudanese security services allegedly with the acquiescence of Kenyan authorities, and both states’ continuous denial of responsibilities, signals a worrying trend of disrespect for human life and insecurity for those who dare to speak up and challenge power.

Samuel Dong Luak was a prominent human rights lawyer, Secretary General of the South Sudan Law Society for over ten years, as well as a member of the South Sudan Constitutional Review Commission. Aggrey Ezboni Idri was an opposition leader, and member of the Sudan People’s Liberation Movement in Opposition (SPLM-IO). In 2013, after receiving death threats for providing legal assistance to the former Secretary General of South Sudan’s governing party, Pagan Amum, who had been accused of “treason” by President Salva Kiir, Dong fled South Sudan and sought refuge in Kenya, where he was granted refugee status. The same year, Aggrey also relocated to Kenya after South Sudan descended into conflict.

The deceased  lived with their families in the capital, Nairobi, until they were disappeared on 23 and 24 January 2017, respectively. Amnesty International, the UN Working Group on Enforced or Involuntary Disappearances, and other human rights groups called on the governments of Kenya and South Sudan to reveal the fate or whereabouts of the two men, suspected to be held by Kenyan authorities before deportation. The families of the disappeared also mobilised, petitioning Kenya’s High Court to produce the two men in court, but the petition was dismissed as  Kenya denied having them in its custody. The family later asked the police to conduct a thorough investigation, but a final judgment in January 2019 confirmed the dismissal of their petition and ended judicial oversight into police action with regard to the case. Yet, the Court had noted that the police investigation fell  short of seeking information from South Sudanese authorities and potential key witnesses.

Amid denials and inaction from both governments and the despair of their families, the fate of Dong and Aggrey remained unknown until 30 April 2019, when the UN Panel of Experts on South Sudan circulated a report pointing to the likelihood of their death. The report states that “the Panel has corroborated evidence strongly suggesting” that Dong and Aggrey were kidnapped in Kenya by an arm of South Sudan’s National Security Service (NSS), transferred to Juba, and executed in a NSS detention and training facility in Luri, on 30 January 2017.

In a report published in April 2018, DefendDefenders reported on the role of the NSS in limiting free expression and committing violations against human rights defenders (HRDs) in South Sudan. This case further highlights the unchecked power and impunity enjoyed by South Sudanese security services, which jeopardises possibilities for peace in the context of the revitalised peace agreement signed in September 2018. South Sudan’s conduct blatantly violates human rights standards, including the Declaration on the Protection of All persons from Enforced Disappearances. Moreover, South Sudan continues to retain laws that are inimical to their regional and international human rights obligation, resulting in shrinking civic space, recession in democratic practice, and a high number of journalists and HRDs who have been killed or forced into exile. The government’s rejection of the Panel’s allegations continues to deny Dong and Aggrey’s families the truth about the killing of their beloved, the possibility to mourn their death, and reparations.

The alleged acquiescence or cooperation of the government of Kenya violates article 3 of the UN Convention Against Torture, which prohibits returning people to places where they risk being subject to torture or ill-treatment, and which has been ratified by Kenya. Dong’s confirmed status as a refugee also commits Kenya to the principle of non-refoulement enshrined in the 1951 Refugee Convention. Worryingly, this does not seem to be an isolated case. For example, in 2016, Kenya deported James Gatgdet Dak, spokesperson for South Sudan’s political opposition, who was sentenced to death by hanging in South Sudan, and later pardoned. Kenyans have also been victim of enforced disappearances and extrajudicial killings. A well-known case is that of Willie Kimani, an investigator with the International Justice Mission, who was allegedly abducted and executed by police in 2016 together with his client and their taxi driver. More recent cases include the suspicious death of woman HRD Caroline Mwatha, who was working on public accountability and extrajudicial killings in the country, and Billian Okoth Ojiwa, a politician and community mobiliser known for his initiative to provide school uniforms for needy children.

Other governments across the continent also seem to be increasingly ready to collaborate for the wrong reasons – to silence criticism, whether from former allies, opposition figures, or HRDs. To mention but a few, in 2018 a Sudanese activist in exile in Egypt, Mohamed Boshi, disappeared from Cairo and was later charged in Sudan. The same year, a Zimbabwean opposition leader, Tendai Biti, was returned to Zimbabwe by Zambian authorities after seeking asylum. These trends send an alarming signal of disrespect of the rule of law, shrinking space for dissent, and increasing risks for HRDs, including those who were already forced into exile to escape threats and reprisals.

Against these worrying trends, I add my voice to that of other human rights organisations in calling on South Sudanese and Kenyan authorities to establish swift, impartial, independent, transparent and thorough investigations into Dong and Aggrey’s case. Both Kenya and South Sudan are State parties to the African Charter on Human and Peoples’ Rights, and must take all necessary measures to uphold their obligations under the African Charter and other international instruments. South Sudanese authorities must  allow the UN Panel of Experts on South Sudan and other monitors to access the site where the killing allegedly took place and all relevant witnesses and information. It is necessary to investigate these events fully, including the chain of command that led from Dong and Aggrey’s disappearance in Nairobi to their alleged execution. Those responsible, irrespective of their rank or standing, need to be held accountable, and the families of the victims must have access to adequate remedies for the losses they suffered.

The African Commission on Human and Peoples’ Rights and other regional and international organs should collectively and strongly ensure that justice and accountability is served in this case. The international community must demand Kenya and South Sudan to end all enforced disappearances and extrajudicial killings and to create a safe environment where pluralistic views can be held and HRDs  can carry out their legitimate human rights activities.

Denials, impunity, and attempts at diffusing responsibility cannot stand in front of such serious allegations. More than two years after their disappearance, justice and accountability are due to the families and the communities Dong and Aggrey were forced to leave behind.