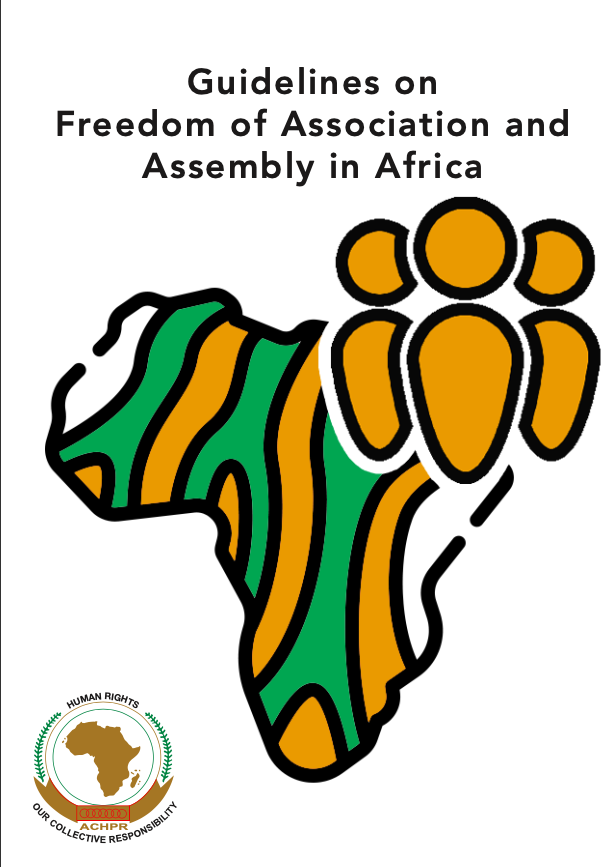 10 September, 2020
Guidelines on Freedom of Association and Assembly in Africa

The Guidelines on Freedom of Association and Assembly of the African Commission on Human and Peoples’ Rights (African Commission) were adopted at the Commission’s 60th Ordinary Session held in Niamey, Niger, from 8 to 22 May 2017; further to Resolution 319 (LVII) 2015 which mandated the Study Group on Freedom of Association and Assembly to develop the said guidelines, under the supervision of the Special Rapporteur on Human Rights Defenders in Africa.

The guidelines were developed in accordance with the relevant provisions of the African Charter on Human and Peoples’ Rights (African Charter), which stipulates under Article 45 (1) (b) that the African Commission is mandated “to formulate and lay down, principles and rules aimed at solving legal problems relating to human and peoples’ rights and fundamental freedoms….”

Through the African Commission’s constant interpretation of human rights, the guidelines are aimed at crystallising human rights standards, as they continue to evolve, with the understanding that new challenges may emerge in the course of time. As such, the guidelines serve as a starting point, which will be complemented by new standards.

Indeed, the guidelines were developed through a series of consultations conducted in all the regions of Africa. Following the preparation and drafting process, the guidelines were reviewed and presented to the African Commission for adoption. Considering the current climate and taking into account the new challenges in the area of the right to peaceful demonstration, a comparative reading of the Guidelines on Freedom of Association and Assembly and the Guidelines for the Policing of Assemblies in Africa was conducted, with the participation of the Special Rapporteur on Human Rights Defenders in Africa. We have thus adopted an original approach to provide human rights defenders in Africa with a working and advocacy tool that can be used when the Special Rapporteur encourages States parties to take ownership of the guidelines and take them into account when drafting laws.

The Special Rapporteur expresses her hope that the guidelines will serve as a basis for the drafting of laws that comply with human rights, in particular freedom of association and assembly in Africa.

READ THE GUIDELINES BELOW