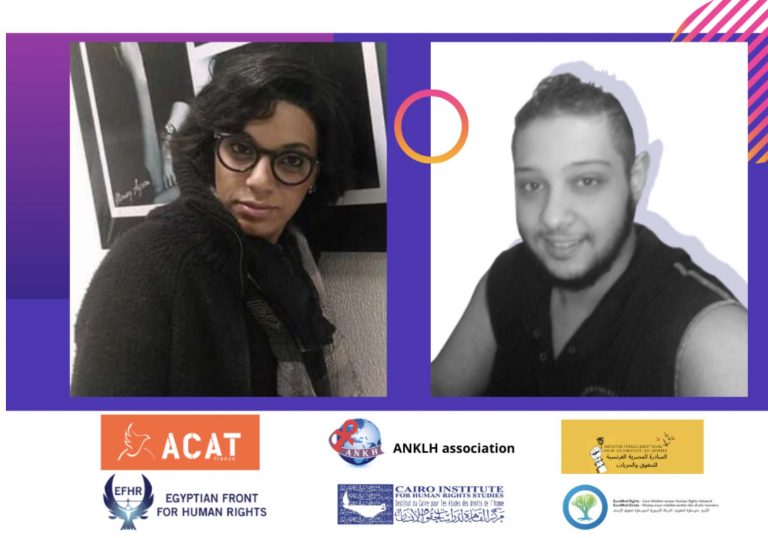 25 November, 2019
Egypt: Urgent appeal for the release of Eman Al-Helw and Hossam Ahmad

Posted at 07:37h in Northern Africa by Gentrix Barasa
Share

We, the undersigned human rights organizations, call on UN Special Rapporteurs, and Members of the European Parliament, and representatives in national Parliaments of European States, to urgently intervene and communicate with the Egyptian authorities to immediately release prisoners of conscience Eman Al-Helw and Hossam Ahmad, arrested during a recent crackdown on activists and opponents to the Egyptian regime.

ANKH association is writing on behalf of Eman Al-Helw and Hossam Ahmad, whom we are legally representing. ANKH asks you to urgently intervene with the Egyptian authorities for the immediate release of Eman and Hossam. They must be treated in a manner that complies with applicable international laws and standards, including their right to be free from torture and cruel, inhuman, or degrading treatment.

Eman Al-Helw is an Egyptian actress and woman Human Rights Defender. She has been active for years in the defence of the rights of actors in the Egyptian film industry. Hossam Ahmad is an Egyptian trans man. They were both arrested by the Egyptian government in an arrest campaign sparked by social media users’ criticism of the government and calls for protests in the aftermath of a deadly train crash at Ramses Station that killed 22 and injured 43 in February 2019.

Eman Al-Helw was arrested on February 28, 2019. She was first detained in an undisclosed location for four days, before appearing at the State Security Prosecution on March 4, 2019.  Then the prosecution remanded al-Helw and dozens of other people – arrested and accused in the same case – into custody for 15 days on charges of participating in a terrorist group and using an internet account (Facebook) to commit a crime punishable by law.

On March 18, the Prisons’ Authority forced al-Helw to undergo a full external physical examination and inspection of her genitals, conducted by doctors at a general hospital, against her will and without medical grounds, which constitutes a clear assault on her bodily and psychological safety.

Hossam Ahmad was also arrested on February 28, 2019. He was first detained in an undisclosed location for four days before appearing at the State Security Prosecution on March 4, 2019, at which time the prosecution remanded him and others into custody for 15 days on charges of participating in a terrorist group and using an internet account (Facebook) to commit a crime punishable by law.

Ahmad is being held in a women’s holding cell in the Abdeen Police Station, and has faced harassment and bullying from other inmates and visitors. He has also been denied hormone therapy by Egyptian authorities since his arrest. The Prisons’ Authority also forced him to undergo a full physical examination and inspection of his genitals without an order from the prosecution, although he has a medical certificate issued by a general hospital describing his condition and medically qualifying him for transsexual therapy; the certificate states that he has not undergone any surgical procedures. Medically speaking, his exam, was all the more unnecessary and constitutes a physical and psychological assault on Hossam Ahmed.

Within State Security case no. 1739, both Eman and Hossam are facing trumped-up charges of joining a terrorist group, under article 12 of the 2015 Anti-Terrorism Law, which exposes them to severe penalties up to life imprisonment. They are also facing charges of using their Facebook accounts to commit a crime punishable by law, according to Article 27 of the Electronic Crimes Prevention Law of 2018, which could result in an additional sentence of up to two years’ imprisonment and a fine of no less than LE 100,000.

Since their arrest, their detention has been regularly renewed for periods of 15 to 45 days, while they have not been brought before any judge. They are still detained in a police station, in an underground cell, and have not been outdoors or seen the sunlight for more than 8 months now.

They have not been transferred to a regular prison because of their presumed sexual orientation/gender identity, as Egyptian authorities assume that they do not fit in with “normal people.”

Egypt is a party to the International Covenant on Civil and Political Rights (ICCPR) and the UN Convention on Torture and Other Forms of Cruel, Inhuman or Degrading Treatment or Punishment (UNCAT), which prohibit the treatment to which Eman and Hossam have been subjected, and also protect their right to freely express their views.

Article 7 of ICCPR and articles 2 and 16 of UNCAT prohibit torture and all other forms of cruel, inhuman or degrading treatment, with no restriction on these prohibitions. Article 19 of ICCPR also states that everyone has the right to freedom of opinion and expression; this right includes freedom to hold opinions without interference.

ANKH considers subjecting Eman and Hossam to those forced physical examinations was a flagrant violation of their rights to privacy and human dignity. It is part of a known and documented pattern of discrimination and violence against sexual minority groups in Egypt, as well as a form of cruel and inhumane treatment that amounts to torture.

The UN Committee Against Torture’s 2002 report also recommended that Egypt take the necessary steps to end all forms of degrading treatment during physical examinations.

Also, the UN High Commissioner for Human Rights has recommended the prohibition of coercive medical procedures imposed by some countries on transgender people, as well as guaranteeing their right to obtain identity papers reflecting their self-defined gender identity.

Request for urgent intervention by UN Special Rapporteurs, Members of the European Parliament, and representatives in national Parliaments of European States

Based on the information above, we respectfully ask you to take up Eman and Hossam’s case with the Egyptian authorities. Eman, Hossam, and other similar cases must be immediately protected by due respect of their sexual orientation and gender identity. They must be held in proper detention facilities , without exposing them to sexual harassment and cruel humiliating procedures that constitute physical and emotional abuse.

Eman and Hossam also must be released along with all other political prisoners detained in Egypt for peacefully expressing their opinions. They are prisoners of conscience deprived of their freedom for having written and expressed themselves about political issues in Egypt.

If you have any additional question about Eman and Hossam’s case, please do not hesitate to contact us.

Thank you for your consideration,