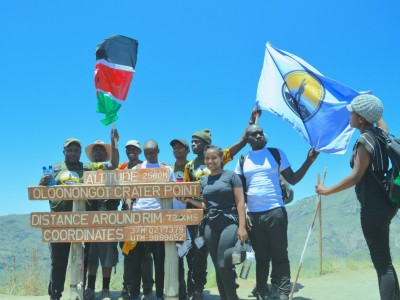 Posted at 14:39h in East & Horn of Africa by Gentrix Barasa
Share

National Coalition of Human Right Defenders executive director Kamau Ngugi says the amount is beyond their expectations as they did not think ordinary Kenyans would take up the matter so fast and wholeheartedly.

Ngugi told the Star during an interview that the majority of Kenyans who have contributed have sent amounts from as little as Sh100, Sh200 and Sh500.

“This shows that ordinary Kenyans have embraced our message, even forgoing lunch to support the course,” he said.

The coalition launched the drive in August under the rallying call of ‘Climb for Justice’.

Part of the drive is to climb Mount Kenya, expected to culminate in a summit on December 12.

The drive aims at raising the money to establish a safe hub where human rights activists can hold meetings for planning and strategy.

“In our planning, we thought the bulk of our support would come from corporate entities, embassies and probably well-endowed individuals. However, we are glad ordinary Kenyans have taken up the matter and are actively supporting,” Ngugi said.

The organisation has also received numerous commitments from corporate entities and embassies, he said, but did not specify the amount.

“Some entities have offered to sponsor billboards for us as part of creating the publicity for this initiative,” he said.

Ngugi said the outfit has always relied on personal generosity and magnanimity of embassies and foreign donors to support activists deserving protection.

But this is no longer tenable, he said, explaining that the dynamics of the West have been volatile in the recent past, impeding the flow of support outside the country.

“You see there is a lot of things changing in the West, particularly the rise of right-wing populism in the US and Europe. Most of these governments and their entities are inward-looking, hence reluctant to support causes outside their countries.”

The donor support to right activism causes has not been the only victim of the rise in populism in the West. Other areas like anti-HIV/Aids initiatives also suffered when the taps for support ran dry once US President Donald Trump rode to power, he said.

Ngugi said the right lobbies tend to be curtailed due to huge expenses of hiring spaces for meetings and training.

“It is really expensive to hire spaces in decent hotels for a press conference, seminar or meeting. We don’t part with less than Sh50,000 in any occasion. This is not sustainable,” the executive director said.

“The funds will help us establish a hub for rights defenders, including whistleblowing investigative journalists.”

The organisation has been supporting rights defenders who find themselves at conflict with the law. It bails out or hires lawyers for activists when they are arrested for the public good.

It also helps them secure a safe haven when rights activists’ lives are in danger.

“We must protect those who give their all to speak out for us. That is why we must support this initiative with our all,” Ngugi said.

Find the Story on The Star Newspaper through this Link.