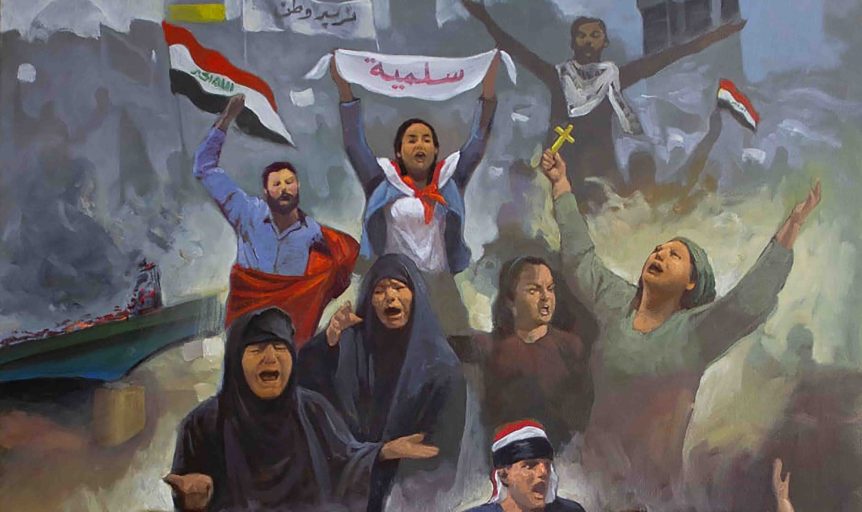 Posted at 07:02h in Northern Africa by Gentrix Barasa
Share

With the uprisings and forces of democratization and political reform either smothered or preemptively stricken over the last several years, the Arab region is now experiencing renewed hope. The values of the Arab Spring have been evoked by protest movements throughout the region, in countries such as Iraq and Lebanon, and Algeria and Sudan, where presidents Abdelaziz Bouteflika and Omar al-Bashir were ousted following a surge of popular demonstrations.

The Ninth Annual Report of the Cairo Institute for Human Rights Studies, “Evocations of the Arab Spring Amid Newly Drawn Armed Conflicts,”  examines the significance and prospects of the new wave of the Arab Spring in Algeria, Sudan, Lebanon, and Iraq. It also appraises armed conflicts underway in Libya, Yemen, and Syria, and continued efforts by authoritarian forces in Egypt, Saudi Arabia, and the United Arab Emirates to frustrate their peoples’ ability to bring change and participate in public and political life. Issued on 2th Jan 2020, the report offers a brief assessment of the status of human rights in the Arab region from January 2018 to August 2019.

The annual report provides a reading of the most significant types of violations within local, regional, and international political contexts, taking the view that regional and international interventions are primarily responsible for renewed conflicts. Regional powers create crises and directly and indirectly fuel conflicts, as seen in Yemen and Libya. The influence of international powers is especially stark in the Occupied Territories, where increased US support under the Trump administration has enabled Israel to expand its colonial settlement project, thwart the Palestinian people’s right to self-determination, and pursue policies of collective punishment and use disproportionate and lethal force against Palestinian civilians.

The report further analyzes repressive practices and egregious violations in North Africa. In Tunisia, there has still been no genuine institutional reform of the judiciary and security apparatus, despite the significant strides made in women’s rights, personal rights, and other fundamental rights such as those of free speech and association. Persisting amid a policy of impunity are torture and abuse in detention sites and the use of lethal force, particularly in connection with counterterrorism.  The president continues to periodically renew the state of emergency.

In Morocco, government authorities continued to suppress peaceful demonstrations – denying the right of association and the right to form independent associations, particularly in the Western Sahara. They also harassed media workers, and the security apparatus received directives to arrest any person who films police personnel. In mid-2018, reports documented the torture and ill treatment of detainees in detention facilities.  Activists have received disproportionately harsh prison sentences amid an ongoing crackdown on civil society.

“The return of popular protests in many Arab countries reflects widespread and growing public anger and frustration, particularly in historically marginalized regions, with the state’s inability to make progress and meet the people’s needs, or with the squandering of public resources and the rampant corruption in state institutions,” said Dr. Moataz El Fegiery, a member of the CIHRS board and the author of the report. “Protests in Morocco, Sudan, Algeria, Jordan, Iraq, Lebanon, and Palestine were mobilized primarily around declining living conditions although they also addressed transparent government and political administration. Young people—the group most marginalized and alienated from political institutions in these countries—were the most active in these protests.”

In light of #COVID19 working from home is common. Read @FrontLineHRD tips on how #HRDs can best protect themselves & their physical space, take care of their well-being & store information or communicate with others in a safe way while working from home⬇️

Free Zyad Elelaimy & Free Ramy Shaath campaigns have written a petition in order to address the situation of detainees in Egypt confined in overcrowded prisons given risks related to the spread of #COVID19
#LetThePrisonersOut
Sign & share the petition⬇️
http://chng.it/sNr4WZC6

📢 Our bi-monthly newsletter is out! Click on the link to find out more about our updates and learn about what our member networks have been doing⤵️

Remember our bi-monthly newsletters are also available in French
https://africandefenders.org/fr/nouvelles-dafricandefenders-janvier-et-fevrier-2020/