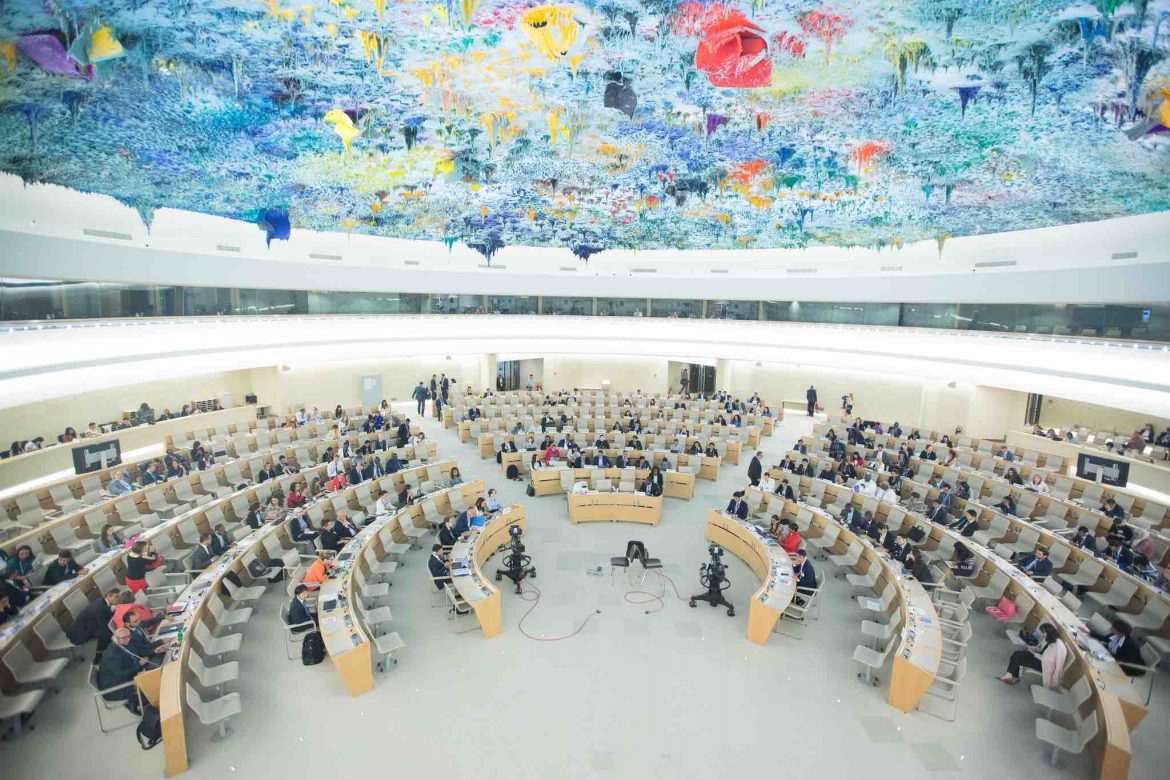 18 November, 2019
CIHRS at the 42nd Session of the United Nations Human Rights Council

Posted at 08:45h in Northern Africa by Gentrix Barasa
Share

CIHRS’ work, together with its partners from regional and international civil society, contributed to progress towards accountability in Libya and Yemen. At a CIHRS’s sponsored side event Ghassan Salamé, head of the UN Support Mission in Libya (UNSMIL) called for the establishment of a Commission of Inquiry (COI) into violations of human rights and international humanitarian law in the Libya conflict. The event gave new momentum to international efforts to establish such a COI at the next Council session.

On Yemen, CIHRS advocacy contributed to the renewal of the mandate of the Group of Eminent Experts on Yemen (GEE). This is an important step in maintaining human rights and accountability for violations as a key element of ongoing international efforts to bring the conflict to an end.

Other achievements included a second cross-regional statement this year condemning human rights violations in Saudi Arabia and the absence of accountability for the murder of journalist, Jamal Khashoggi. Assistant Secretary General Andrew Gilmour, who spoke on a panel with CIHRS director Bahey Eldin Hassan, identified Egypt as a country that engages in “appatern of reprisals” against those who engage with the UN.

An Unprecedented Call for Accountability

High-ranking United Nations (UN) officials and dozens of states have called  for an international investigation into war crimes and human rights violations in Libya at the 42nd session of the Council. These calls represent the strongest push for accountability for crimes committee in Libya since the fall of the Gaddafi government. 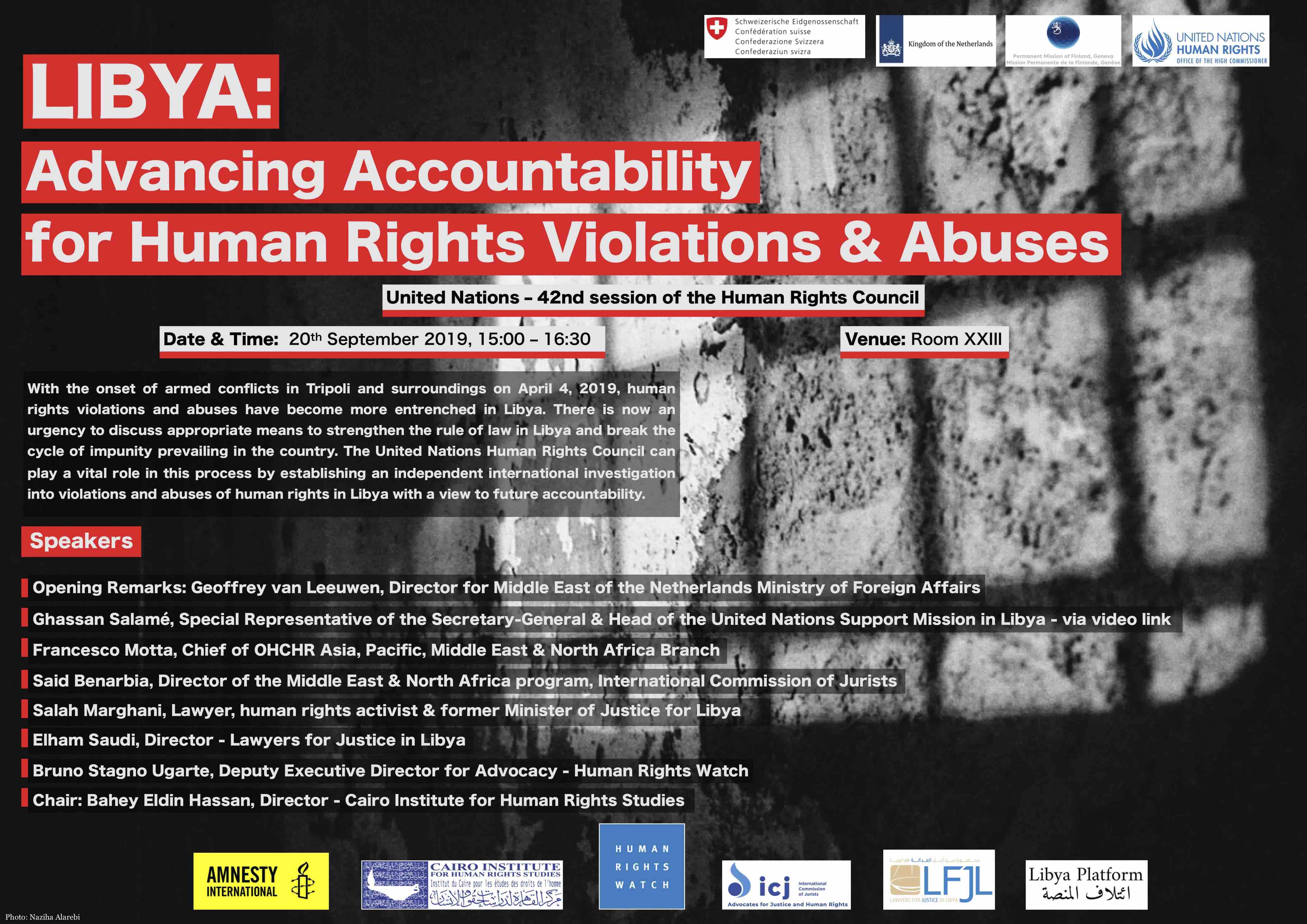 The urgency of establishing an international investigation was emphasized during a high-level event entitled “Libya: Advancing Accountability for Human Rights Violations & Abuses,” held on the 20 September during the Council session. The event was organized by the Netherlands, Switzerland, Finland, the Office of the High Commissioner for Human Rights (OHCHR), and prominent international and Libyan civil society organizations, including CIHRS.

In an exceptional joining of international forces, distinguished figures from the UN, the Dutch Ministry of Foreign Affairs, and international and Libyan human rights organizations were brought together to discuss appropriate means of strengthening the rule of law in Libya and breaking the cycle of impunity prevailing in the country, notably through the establishment of an independent international investigation at the Council. Accountability is imperative to any progress towards peace, stability, and justice in Libya, and a Commission of Inquiry at the Human Rights Council is “simplest and strongest way to achieve” greater accountability for crimes committed in Libya, emphasized Mr. Ghassan Salamé, Special Representative to the UN Secretary-General (SRSG) and Head of the United Nations Support Mission in Libya (UNSMIL).  Justice for crimes in Libya is “neither optional nor negotiable” declared Geoffrey van Leeuwen, Director for Middle East of the Netherlands Ministry of Foreign Affairs, adding that the Netherlands would consult on how to move forward on this matter with partners.

During an interactive dialogue on Libya at the Council, many UN member states backed calls for such an investigation.  According to a statement delivered on behalf of all members of the European Union, “Those responsible for serious violations of International Humanitarian Law and violations and abuses of international human rights law must be brought to justice and held to account. In order to facilitate this, comprehensive, independent and credible investigations have to be undertaken, including by the Human Rights Council.”  UN Deputy High Commissioner for Human Rights, Kate Gilmore, made clear that the OHCHR supports the call for an investigation and is “ready to support any such investigation.”  In its intervention during the same debate, CIHRS highlighted the growing international consensus on the need for an investigation at the Council:

“International attempts to achieve a national ‘peace’ accord in Libya have appeared to down-play and marginalize national and international criminal accountability in order to appease armed groups within the country…A new approach is required that puts accountability for ongoing violations and abuses of international human rights and humanitarian law at the at the top of the list of priorities… A good first step would be to re-establish an International Commission of Inquiry on Libya at this Council.”

According to the Director of the Geneva Office of CIHRS, Jeremie Smith, “It is now incumbent on UN member states to ensure these calls are translated into action by establishing such an investigation as soon as possible.  Failure to do so will only embolden armed groups in their use of violence, including against civilians, infrastructure, detainees, migrants, human rights defenders and members of the judiciary.”

The Price of Silence

A lack of political will persisted among UN member states to hold the Egyptian government to account for its unprecedented and brutal campaign of repression.  Silence by the international community on this critical situation has only emboldened the current government in its most recent and ongoing wide-scale  crackdown.  CIHRS in a speech before the Council on the 17 September called attention to the severity of the situation:

The Egyptian government, under President Sisi, is currently overseeing the most widespread and brutal crackdown on civil liberties and human rights in the country’s modern history.     This includes the use of mass death sentences for citizens denied a minimum of fair trial guarantees, epidemic levels of torture, enforced disappearances and deaths in detention.  A slew of repressive laws and practices are being used to completely close off basic freedoms and civil rights…. In an effort to silence criticism of this human rights crises the government has engaged in sustained efforts to eradicate the national human rights movement and independent media.  Human rights defenders, media workers and peaceful dissidents have and continue to be victims of enforced disappearances, torture and arbitrary detentions.  Rights defenders and lawyers have also been subjected to repressive measures such as travel bans, asset freezes and politically motivated criminal charges.

On the 18 September, The Director of CIHRS, Bahey Eldin Hassan, alongside the United Nations Assistant Secretary-General for Human Rights, Andrew Gilmour, participated in a panel at the addressing the urgent need to end attacks and reprisals by states against individuals who cooperate or attempt to cooperate with the United Nations.  The event, entitled “Ending Reprisals,” was organized by the international Service for Human Rights (ISHR), CIHRS and Forum-Asia.  Human rights defenders from Burma and Guatemala also participated on the panel which was chaired by the Director of ISHR, Phil Lynch.

In the report on reprisals submitted to the Council by the Assistant Secretary-General, Egypt was identified as a country that commits a “pattern” of attacks against those who engage with the UN, the first time such a designation has been made by the office of the Secretary General. 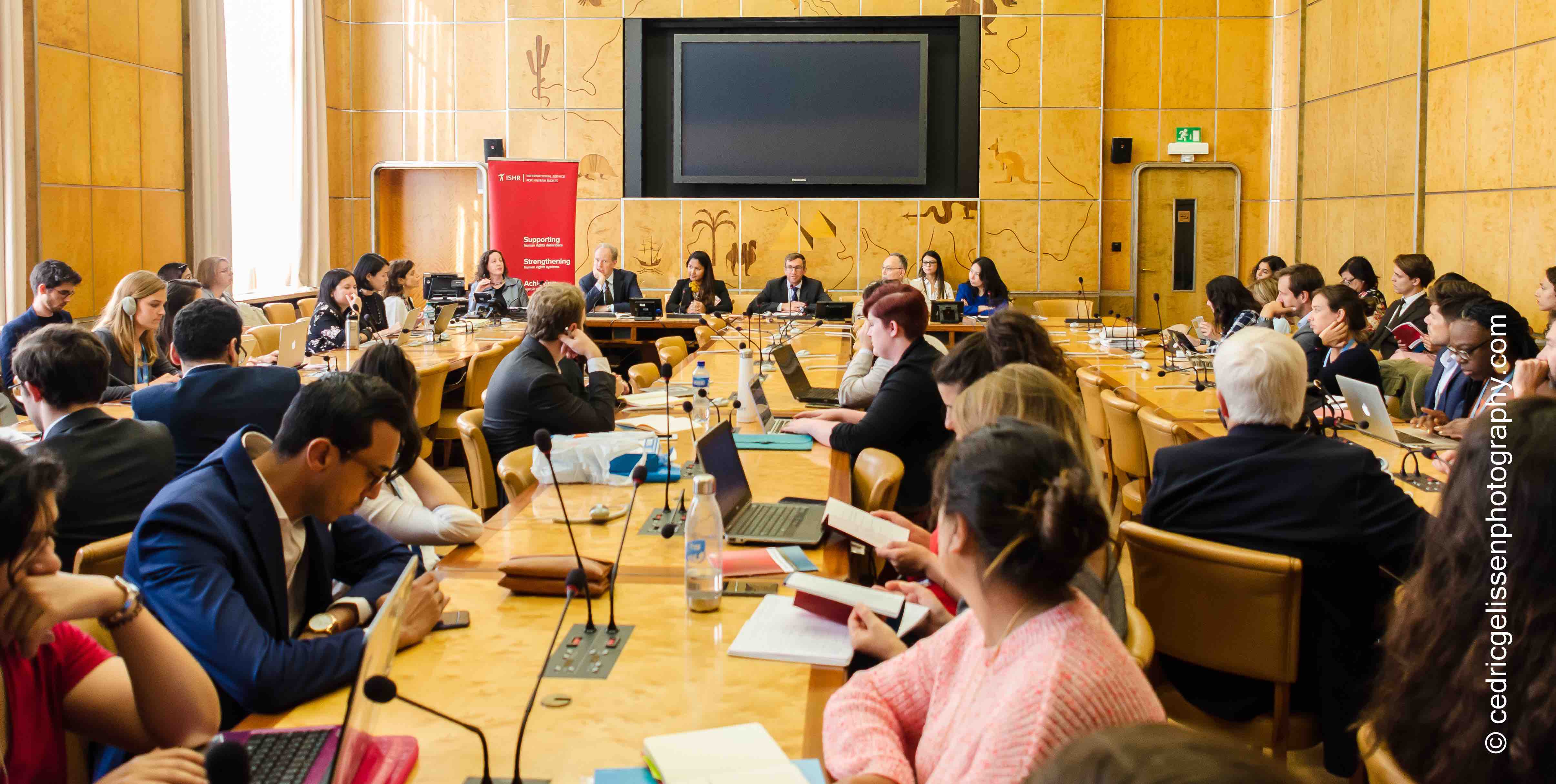 Mr. Hassan highlighted the systematic reprisals that have been and continue to be carried out by the Egyptian government against those who cooperate with the United Nations. Such reprisals have included: criminal charges levelled against rights defenders for their engagement in the last Universal Periodic Review (UPR) of Egypt; a campaign of attacks and intimidation against those who cooperated with the Special Rapporteur on the Right to Adequate Housing during and after her visit to Egypt at the end of last year; the forced disappearance and arbitrary detention of Egyptian lawyer Ebrahim Metwally as he was on his way to meet with the UN Working Group on Enforced Disappearances; death threats against rights defenders in state controlled media and by Egyptian government officials, including against Mr. Hassan and other staff of CIHRS; as well as a host of other attacks and acts of intimidation against those who have cooperated or have sought to cooperate with UN human rights mechanisms. 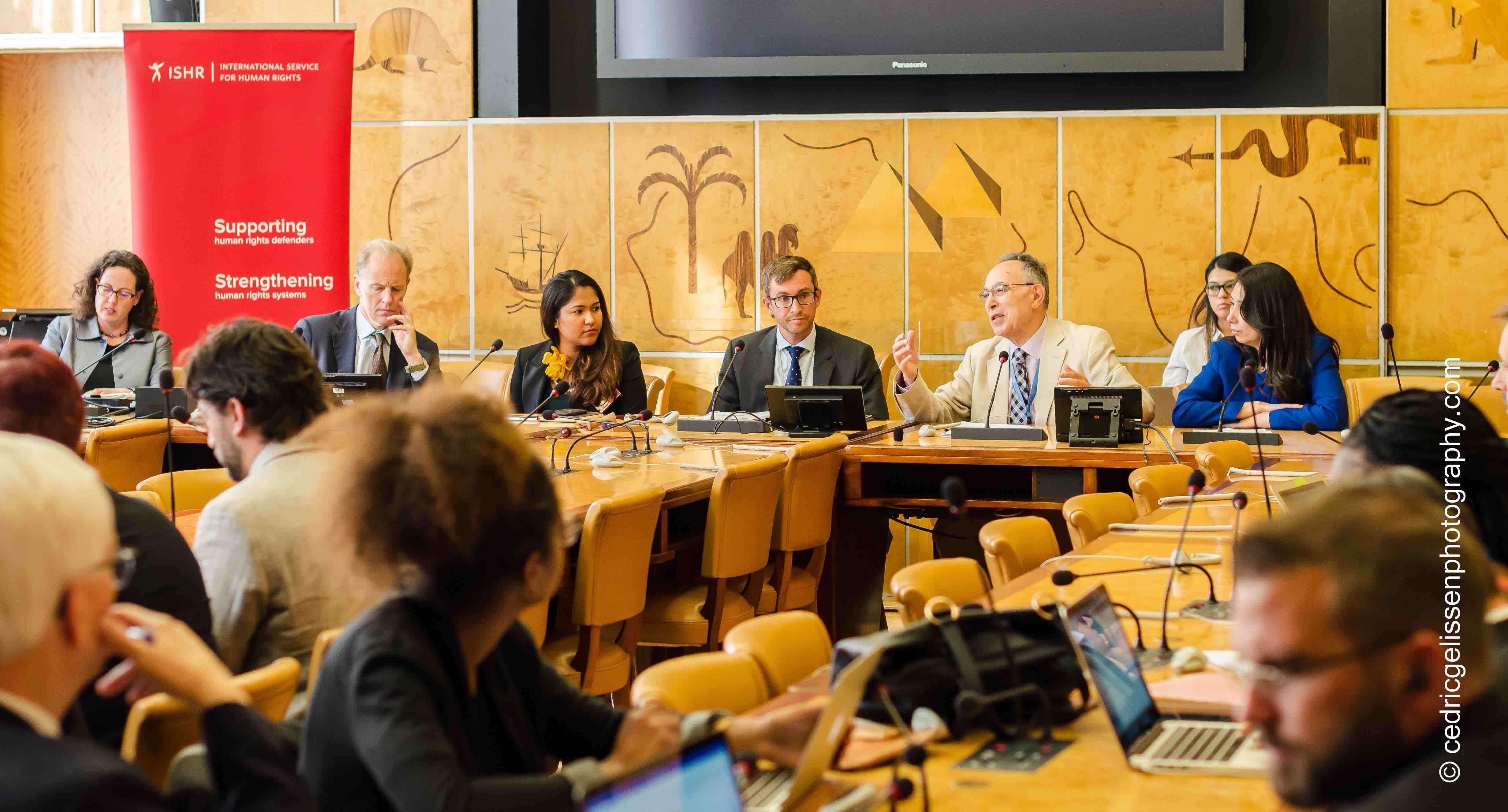 Mr. Hassan called for urgent action by member states of the United Nations to address these attacks by Egypt and warned that independent civil society in Egypt who will attempt to engage in the upcoming UPR of Egypt that will occur in November of 2019 are at severe risk of further attacks by the Egyptian government if the international community fails to act.

Reiterating Mr. Hassan’s message, CIHRS, in a separate speech before the Human Rights Council, called on the international community to take action to address these attacks:

This pattern of behaviour, which threatens to make a mockery of the UN human rights system, has not been met with an adequate response by this Council or member states of the United Nations.  We call on member states and officials of the United Nations to prioritize protection of independent Egyptian civil society in the context of Egypt’s Universal Periodic Review…We ask that you work to ensure that Egypt lifts the arbitrary travel bans against at least 31 rights defenders under case 173 that, if maintained, will deny independent Egyptian human rights defenders the ability to engage in the UPR of Egypt.  If these individuals are not allowed to travel in order to engage in the UPR the legitimacy and relevance of this process will be severely undermined.

On the 27 September, as the Council came to a close and protests across Egypt against government corruption began to proliferate the UN High Commissioner for Human Rights,  Michelle Bachelet,  called on the Egyptian government to respect the right of Egyptians to peacefully protest and to end the mass arrest of protestors.  According to the High Commissioner, Egyptian citizens “should never be detained, let alone charged with serious offences, simply for exercising those rights…I urge the authorities to radically change their approach to any future protests, including those that may take place today.”

In light of the recent change in government in Sudan caused by mass protests, a joint letter published ahead of the 42nd Session of the Council by Sudanese, regional and international civil society, including CIHRS, outlined and called for steps by the Council to address violations and abuses of human rights, ensure accountability and contribute to human rights reforms in the country.   On 12 September, CIHRS cosponsored an event entitled, Sudan: Ensuring a Credible HRC Response.”  The event brought together Sudanese human rights defenders and experts to discuss how the Council can provide a credible response to the current situation in Sudan and support human rights reforms within the country.

The discussion took place as the OHCHR was in discussions with the Sudan government on opening a fully-mandated country office there with the capacity to monitor and report on the situation as well as ensure technical and capacity building functions.  The “milestone agreement” to set up this presence was signed by the High Commissioner and government of Sudan on the 25 September, and provides for wide-ranging cooperation on critical human rights issues including legal and institutional reform, transitional justice, and the strengthening of civil space.

On the 23 September the resolution on Sudan establishing “technical assistance and capacity building to further improve the human rights situation in Sudan” was renewed by the Council.