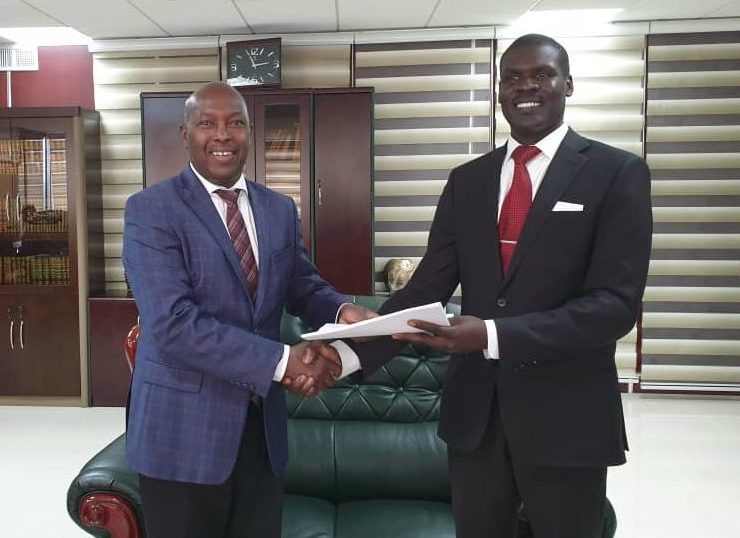 30 October, 2019
At a critical juncture for Sudan, DefendDefenders and AfricanDefenders visit the country and show solidarity with its people and civil society

Posted at 07:50h in AfricanDefenders, East & Horn of Africa by Cristina Orsini
Share

From 11-16 October 2019, DefendDefenders  and AfricanDefenders conducted a mission to Sudan, at a critical time for the coun­try and the human rights its people. The delegation was led by Hassan Shire (AfricanDefenders’ Chairperson and DefendDefenders’ Executive Director) and included Majid Maali (Capacity Buil­ding Officer) and Nicolas Agostini (Rep­resen­tative to the UN).

The mission aimed at showing solidarity with Sudanese human rights defenders (HRDs) and civil soc­­iety organisations (CSOs); assessing the human rights situation following the formation of a tran­­sitional govern­ment; strengthening contacts with the gov­ern­ment; asses­sing the challenges and needs of Su­danese HRDs, par­tners, and human rights CSOs; and identifying opportunities for collaboration and work, focusing on the gaps highlighted by HRDs and partners in terms of protection, security mana­ge­­ment, capacity-buil­ding, and advocacy and research. 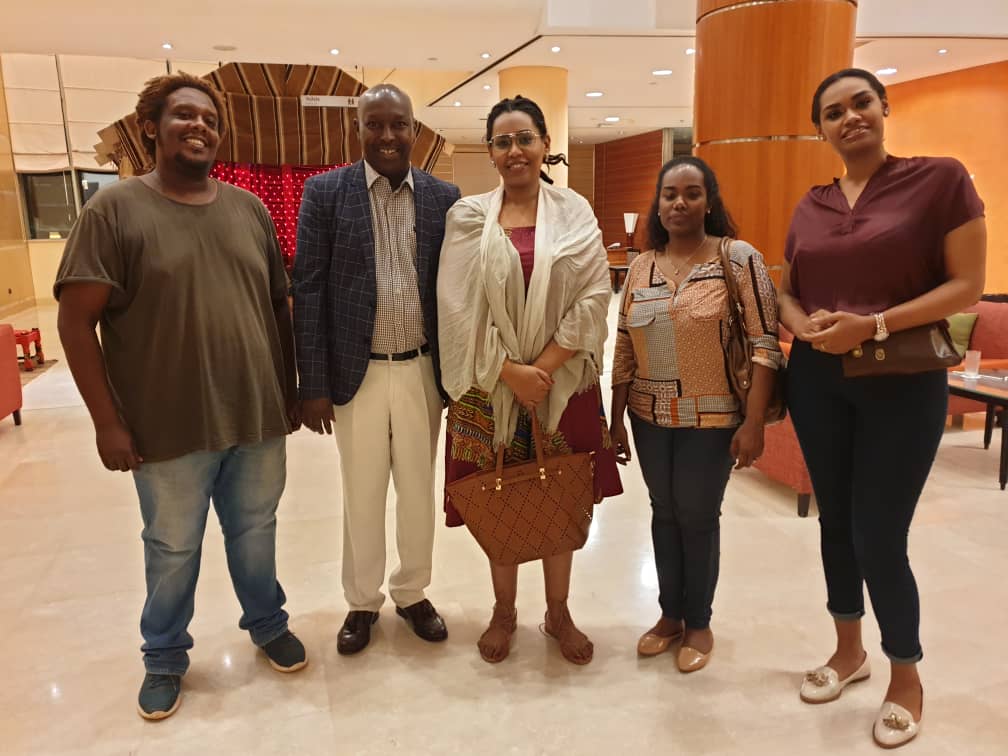 Since December 2018, Sudan has witnessed significant political developments that have the potential to bring about las­ting hu­man rights progress for its citizens. While UN and African Union/IGAD efforts have been far from satisfactory, domestic political dynamics have shifted and there may now be more space for meaningful, systemic human rights reforms. The participation of civil society mem­bers in the transitional government (including that of Dr. Nasredeen Abdulbari, who was appointed Minister of Justice and previously conducted advocacy with DefendDefenders as a long-time member of our network) and greater women representation also offer hope and avenues for engagement with the Suda­nese authorities, after decades of mistrust, restrictions to the exer­cise of fundamental rights and free­doms, and attacks on HRDs and inde­pen­dent civil society.

In the meetings we held with HRDs and civil society, the delegation saluted and applauded Sudan’s Revolution, in particular the role played by women and youth. Earlier this year, Sudan Women Protest received the Pan-African Shield Award and the North-Africa Shield Award by AfricanDefenders due to their dedication and progressive work to promote peace and justice throughout the Sudanese Revolution. HRDs with whom we interacted conve­yed to us an overwhelming sense of pride that the Sudanese people reclaimed their space and their rights and now have a government that works for all Sudanese citizens and is responsible before them. They also stressed challenges and significant, outstanding human rights issues that must be addressed to pre­vent backsliding and preserve the achievements of the Revolution.

During the visit, the delegation met with human rights groups and lawyers working towards justice and accountability for the victims of violations took place in the past 30 years, including the 3 June massacre, and campaigning for transitional justice, including the Nuba Mountains Bar Association and women lawyers groups. 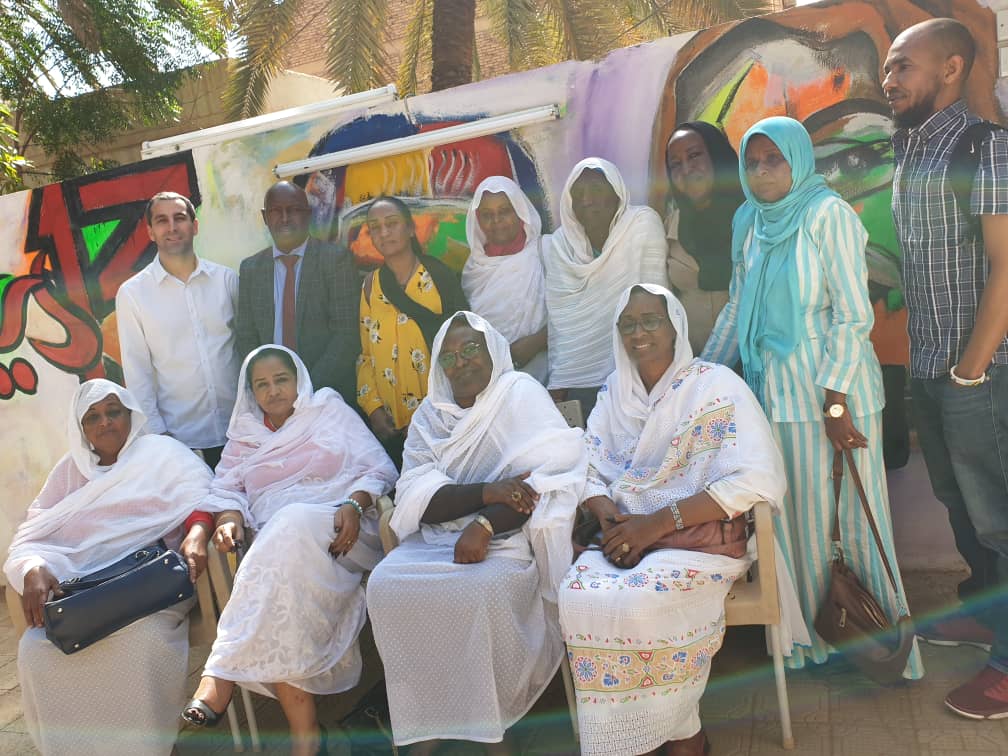 The delegation met with emerging youth rights initiatives and groups working on thematic issues across the country, among them the “Safe Sisters” DefendDefenders previously trained on digital security and who started training youths inside the country, bloggers, women’s rights activists, and youth activists working on peace-building and conflict transformation in Darfur, Eastern Sudan, Blue Nile, and South Kordofan. DefendDefenders and AfricanDefenders commend the tremendous work conducted by youths, within the Sudanese human rights movement. 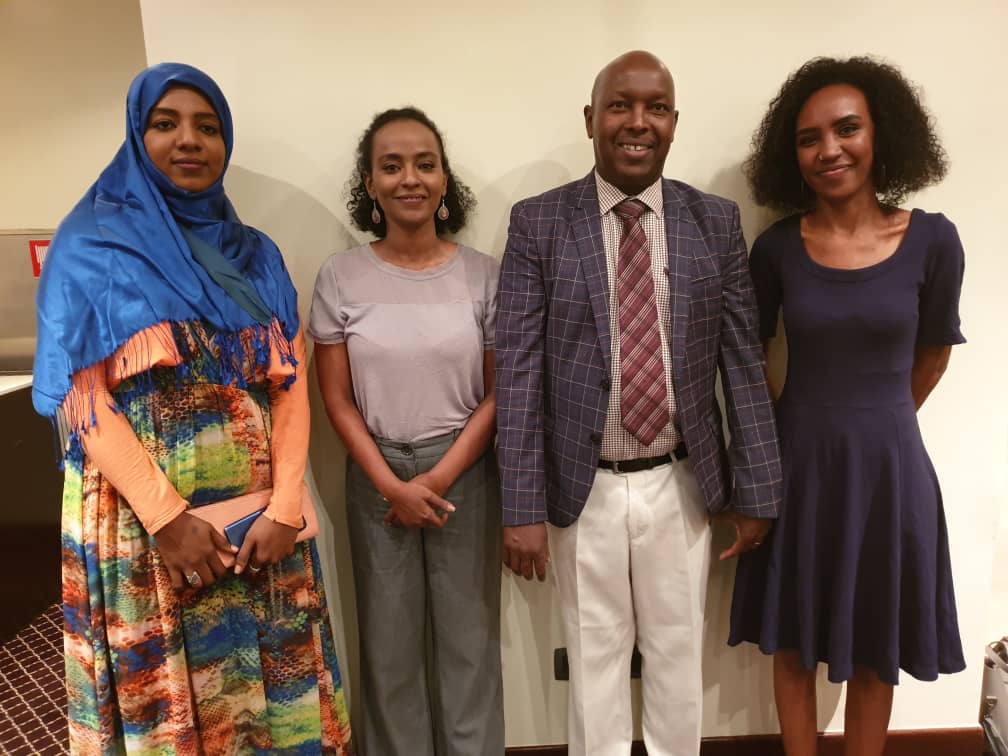 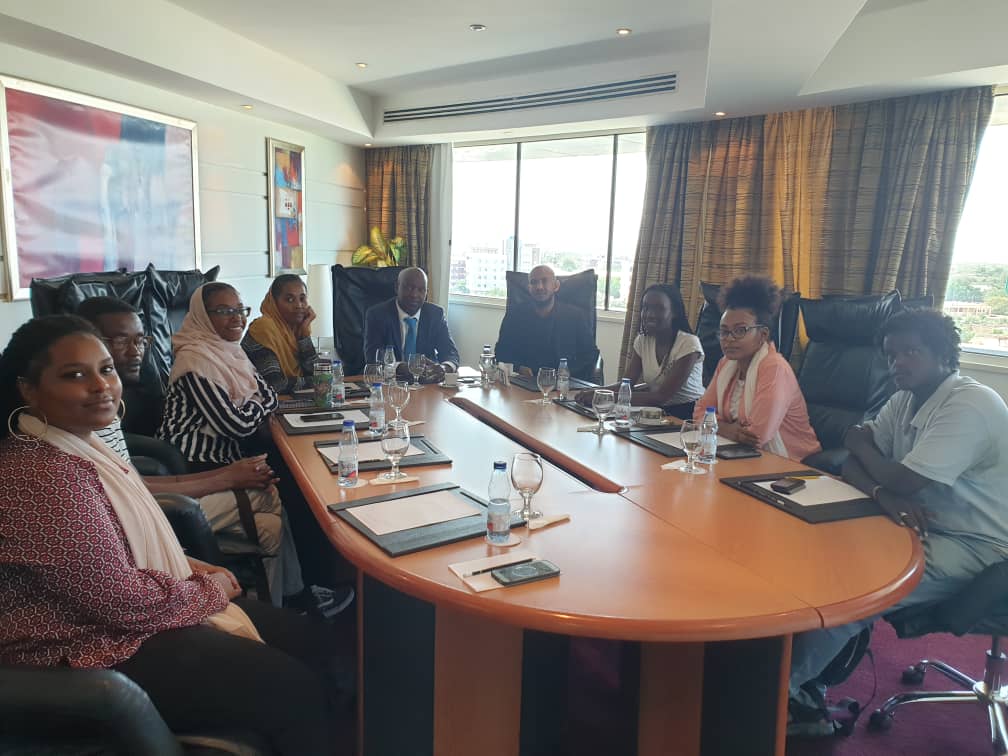 The delegation paid a visit to the Ahfad Trauma Centre, which has been providing counselling and psychosocial support to the victims of the 3 June massacre and to IDPs, and visited the Institute for Reproductive Health and Rights, a group of brave Sudanese women HRDs working on reproductive health and rights in a very conservative society.

We also met  with  Dr. Nasredeen Abdulbari, Minister of Justice, and  with  Ms. Lena El-Sheikh Mahjoub, Minister of Labour and Social Development, both civil society members of the transitional government. 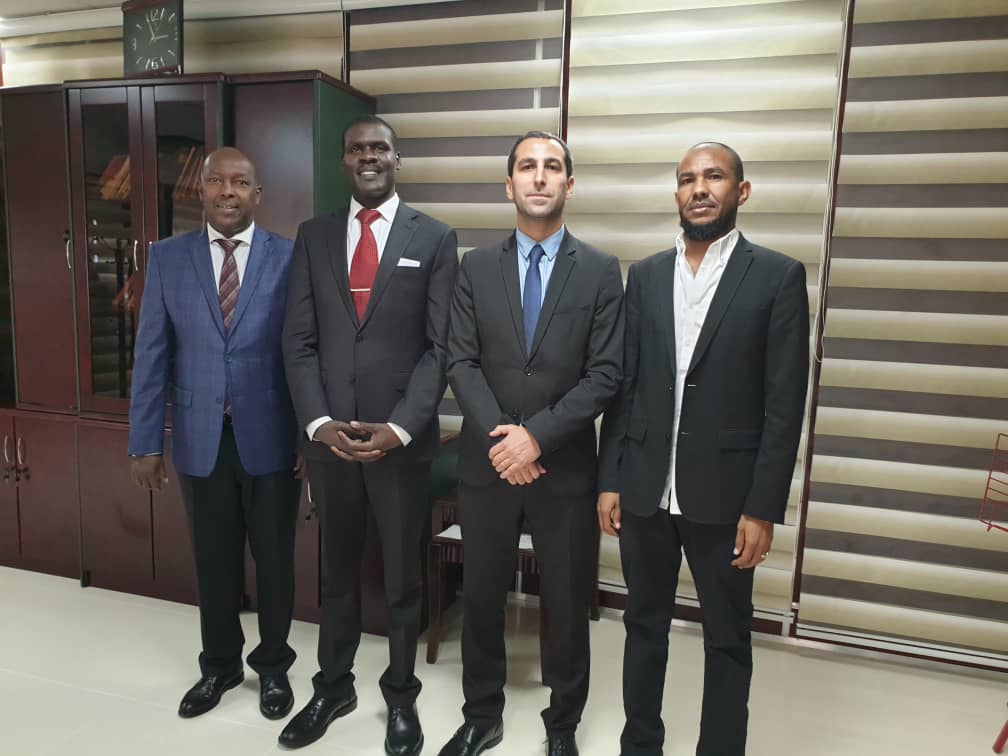 The transitional government has displayed a po­li­tical will and sent encouraging signals with regard to human rights, including at the 42nd session of the Human Rights Council (HRC42). Among other things, it has announced its intention to ratify the Convention on the Eli­mi­nation of All Forms of Discrimination Against Women (CEDAW) and the Convention Against Torture (CAT), and to look into laws that are still in force yet are in­con­sistent with human rights obligations, inc­luding national security legislation. For instance, the law granted the infamous National Intelligence and Security Service (NISS) and its members immunity from prosecution, as well as, among other things, extensive arresting powers. These were a recipe for grave abuses. Sudan has also an­nounced a “nothing to hide” and “full coope­ra­tion” policy and Prime Minister Abdallah Hamdok expressed his resolve to investigate the grave human rights violations committed in response to peaceful protests, including the 3 June 2019 massa­cre. The signing of an  Agree­­ment with the Office of the UN High Commissioner for Human Rights (OHCHR) regarding the opening of a fully-mandated country office (with regional field offices) is of critical importance. It will allow OHCHR to monitor and report on the domestic human rights situation and to provide the government and other stakeholders with technical assistance and capacity-building services.

However, ongoing, resolute, and holistic efforts will be needed to ensure that Sudan conducts sys­temic human rights reforms, including by addressing widespread impunity for human rights violations and abuses and creating and maintaining an enabling environment for HRDs and civil society. While the Sudanese people secured tremendous achievements through the peaceful exercise of their fundamental rights, major challenges remain.[1]

Accountability for past and ongoing vio­la­tions, committed both in the centre (Khartoum) and in the peripheries (including conflict areas of Darfur, South Kordofan, and Blue Nile), is one of these. The South Kordo­fan peace talks that opened on 14 October 2019 in Juba are a reminder that a holistic approach to Sudan’s human rights, political, humanitarian, and socio­eco­nomic issues is needed. There will be no lasting peace, democracy, and development without a central place for human rights, justice, redress, respect for the rule of law, but also inclusiveness, government accountability at all levels, pro­vision of basic services to the population, a fair sharing of natural resources, and, above all, acknow­led­gment of the identity and equal dignity of all Sudanese.

Accountability for the 3 June 2019 massacre, which was reminiscent of patterns of atrocities committed throughout the country in the last 30 years, including by “Janjaweed”/Rapid Support Forces (RSF) militias (see Background below) will be essential to building resilience and avoiding recur­rence of the vio­la­tions – as violence continues in several areas including Darfur and RSF presence is still being felt. There should be a thorough inquiry into all violations and abuses of human rights and violations of international humanitarian law. International or African involvement is desirable to help Sudan meet the highest standards of investigation and accountability, including investigation into the chain of com­mand of the Transitional Military Council (TMC) and RSF.

Creation and maintenance of an open civic space will also be key to making the “new Sudan” a reality. HRDs and civil society need to operate in a free and enabling environment in which they and their rights are protected. Beyond the legislative reforms Sudan needs, we discussed with our interlocutors the long-term issue of social change, especially with regard to women as they continue to be subjected to discrimination, sexual and gender-based violence (SGBV), inequality, stereotypes, harmful practices (including female genital mutilation and child, early and forced marriage), and socially constructed gen­der roles. During our meeting with the Minister of Justice, we handed over to him a mapping of recommendations relevant to HRDs, civic space, legal reform, rule of law, justice sector reform formulated in the last five years by UN bodies and mechanisms (including the Human Rights Council, special procedures, states (in the framework of the Universal Periodic Review (UPR)), treaty bodies, OHCHR, and the UN Security Council).

Human rights need to be main­strea­med in the work of all ministries. A human rights-based approach is needed to address the grievances of all Sudanese, both in the centre and in the peripheries.

Do you want to read more about the political developments in Sudan since December 2018? Read the  background paper

For more information about this mission, please contact [email protected]