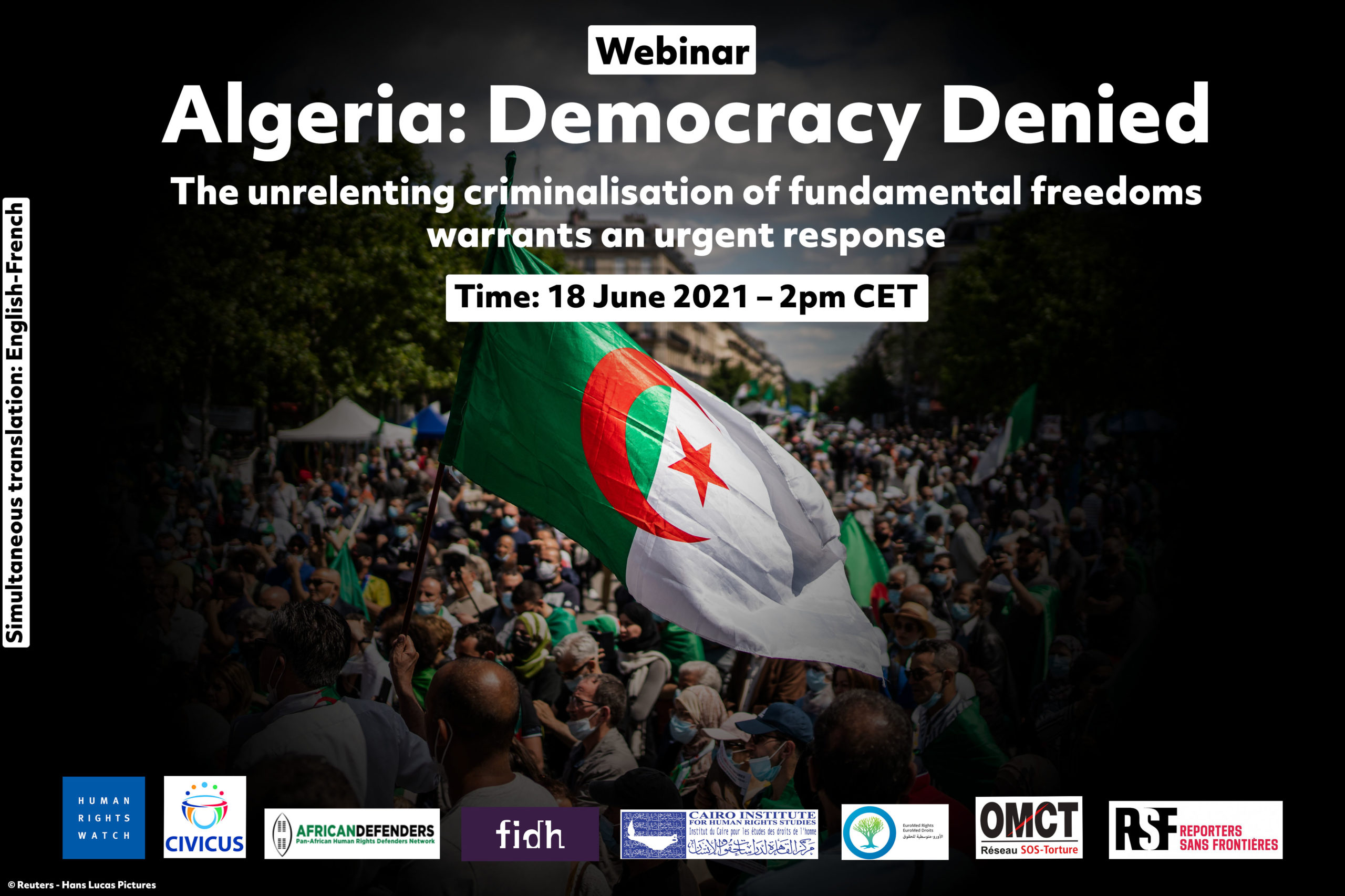 On Friday 18 June 2021, the Cairo Institute for Human Rights Studies (CIHRS) hosted a side event to the 47th session of the United Nations Human Rights Council, titled “Democracy Denied: The relentless criminalisation of fundamental freedoms warrants an urgent response.” The side event was held in collaboration AfricanDefenders and seven other international organizations to discuss countering the Algerian government’s escalating human rights violations in the context of its crackdown on fundamental freedoms.

Among the attendees of the side event were Clément Nyaletsossi Voule, United Nations Special Rapporteur on Rights to Freedom of Peaceful Assembly and of Association; Amna Guellali, Deputy Regional Director for Middle East and North Africa (MENA) for Amnesty International; Mouloud Boumghar, professor of public law and specialist in international human rights law, and Dalia Ghanem, resident scholar at the Malcolm H. Kerr Carnegie Middle East Center.  Nadège Lahmar, researcher on the Maghreb region at CIHRS moderated the discussion.

Special Rapporteur Voule opened the event by underscoring that the right to protest and demonstrate is a fundamental human right guaranteed by the International Covenant on Civil and Political Rights. The blocking of protests must end, Voule urged, while affirming that demonstrators should never be criminalized for peaceful assembly.

The Special Rapporteur expressed his deep concern about the deteriorating human rights situation in Algeria, including the dire situation of human rights defenders amid the closure of the public sphere and the disproportionate use of force against peaceful demonstrators. Voule has submitted a request to the Algerian authorities for a field visit to evaluate the human rights situation on the ground and to make recommendations towards ending the ongoing crackdown throughout the country, especially against activists of the pro-democracy Hirak movement.

The Special Rapporteur called on the international community to use all available channels of pressure to address the deteriorating human rights situation in Algeria. The ongoing 47th session of the UN Human Rights Council, which began today, 21 June, should be a platform to publicly address the intensifying repression of freedoms in the country, including the Algerian government’s targeting of human rights defenders and journalists involved in the Hirak. Voule called for an end to these practices, and for detained activists to be released.

Amna Guellali of Amnesty International focused on the alarming escalation of the Algerian government’s crackdown on the  rights of peaceful assembly and expression and its silencing of the Hirak movement. She reviewed the most common repressive tactics employed by the government in 2021, which include laws broadening the definition of terrorism to criminalize peaceful protest, government rhetoric demonizing the Hirak movement, and attempts to dissolve civil society organizations active in the movement.

Guellali, along with public law professor Mouloud Boumghar, called on member states of the United Nations to publicly condemn the government’s widening repressive practices during the ongoing session of the Human Rights Council. Their calls reiterated those of 82 human rights organizations in a 28 May letter addressed to UN member states.

Boumghar discussed the gap between the Algerian government’s discourse and the reality on the ground, referring to the repressive climate in which the legislative elections took place on 12 June. Boumghar further examined the strategy of the Algerian authorities, which is based on maintaining political stalemate and fuelling tension in Algeria, in addition to criminalizing the demands of the Hirak movement, describing it as a terrorist group that instigates turmoil.

Dalia Ghanem, resident scholar at the Carnegie Middle East Center, explained the military nature of the ruling regime in Algeria in the context of the latest political developments. The pre-eminence of the military in Algerian politics, Ghanem cautioned, creates a genuine crisis in the country with profound repercussions on policymaking, society, and the economy.

Participants focused their questions on opportunities to press for change, and the role of Algerian, regional and international civil society in this regard. The ongoing Human Rights Council session, the Special Rapporteur re-emphasized, is a key opportunity for member states to pressure the Algerian government. He affirmed the importance of civil society’s documentation and monitoring of violations on the ground as a valuable source of information and as a tool to apply pressure at the local and international levels in favor of democracy and respect for human rights.

The side event was held in collaboration with the following organizations: