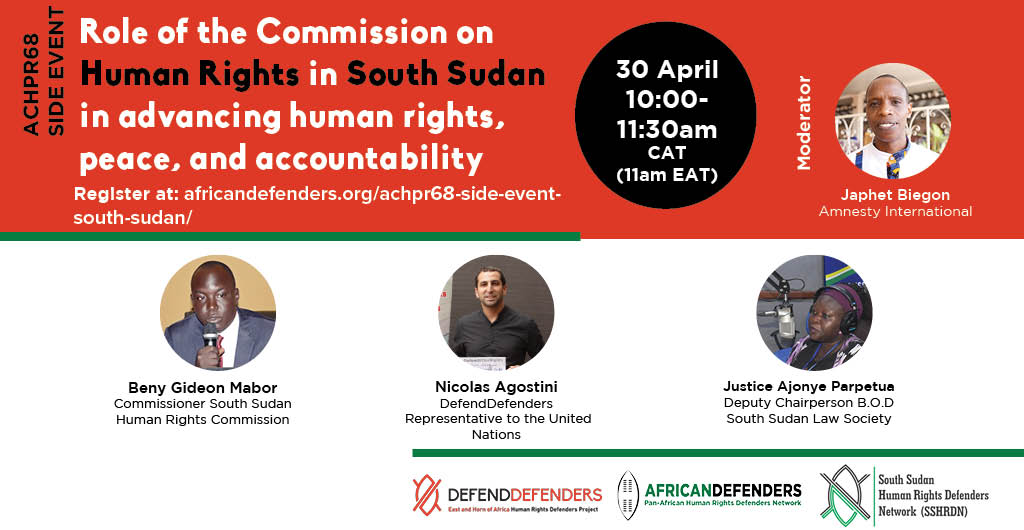 29 April, 2021
Role of the Commission on Human Rights in South Sudan in advancing human rights, peace, and accountability

Posted at 08:51h in AfricanDefenders by Gentrix Barasa
Share

Two and a half years after signing of the Revitalised Peace Agree­ment, South Sudan faces major governance, security, huma­­ni­tarian, and human rights issues. Fighting continues in parts of the country, and inter-communal tensions and conflict threaten the coun­try’s stability and people’s safety, human rights, and livelihoods. Many human rights concerns remain unaddressed, and human rights defenders, jour­na­lists, and other independent actors face sustained pressure. Impunity remains widespread for human rights violations and abuses. Patterns of sexual violence, grave violations, and international crimes continue to be reported, including deliberate targeting and starvation of civilians while justice and accountability remain elusive.

Despite the South Sudanese Government’s approval of a plan by the Ministry of Justice and Constitutional Affairs to set up transitional justice institutions, including the Hybrid Court for South Sudan, the plan is yet to be implemented and these mechanisms operationalised to achieve justice and hold perpetrators of the most serious crimes to account. In the meantime, the UN Commission on Human Rights in South Sudan (CHRSS) remains the only international mechanism mandated to collect and preserve evidence of violations with a view for future prosecutions. Although its mandate was renewed during the 46th session of the UN Human Rights Council (UN HRC), it faced strong resistance from South Sudan and African states in Geneva.

The significance of the CHRSS cannot be overemphasized, it is a vital mechanism and one of the strongest creations of the UN HRC. While it focuses on a human rights mandate, its work is also part of African and international efforts to usher in sustainable peace, stability, and respect for human rights in South Sudan. It is therefore important to build support for it at the regional level and raise awareness of its value until the transitional justice mechanisms set out in Chapter V of the Revitalised Peace Agreement are operational and effective

Objectives of the side event