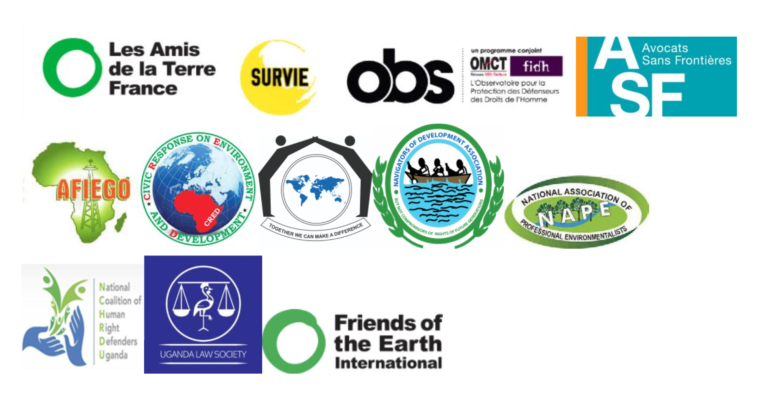 Posted at 08:26h in East & Horn of Africa by Gentrix Barasa
Share

Three journalists and six environmental activists were arrested by police in Hoima, Uganda, on Tuesday 15th and Wednesday, 16 September 2020. Two are still in detention. They had come to denounce the destruction of one of the country’s largest forest reserves and the risks posed by the development of the oil industry in Western Uganda.

On the evening of Tuesday, 15 September, two journalists were arrested while on their way to participate in a radio program in the city of Hoima. They had planned to call citizens to mobilize to protect the Bugoma forest and to denounce human rights and environmental abuses linked to a nearby oil project, led by French company Total. They spent the night at the police station. As they tried to negotiate their release, seven members of civil society and journalists were subsequently arrested on Wednesday morning.

Although seven defenders and journalists were released after several hours spent in custody yesterday, two are still held in custody this morning. The police department spoke publicly of a “preventive arrest”, stating: “we want to make sure they don’t have that demonstration today” (1). They also claim that the groups did not have the relevant authorisations. Local civil society organisations say they were denied the right to demonstrate when they notified the police, and denounce an operation of intimidation.

The arrested individuals belong to a network of activists mobilised to safeguard the Bugoma forest, a protected tropical forest of 65,000 hectares. Yesterday, they called for public mobilisation against the government’s decision to allow large-scale sugarcane cultivation in this vulnerable and protected ecosystem. They also warned about the social and environmental consequences of oil projects in the region, including those of Total (Tilenga and EACOP), which are also strongly criticized internationally (2).

These arrests come at a time when Total and its partner CNOOC are gearing up towards the extraction phase of their oil project and the construction of a transnational oil pipeline in the region (3).

According to Romain Ravet, Country Director of Avocats Sans Frontières in Uganda,

“Arrests are multiplying in Uganda in general, and around international investment projects in particular. Charges are rarely pressed after the arrests, and people are not prosecuted. This could indicate that the arrests are done without proper cause, and thus primarily aimed at intimidating and neutralising human rights defenders.”

According to Thomas Bart from Survie,

“This atmosphere of intimidation also impacts people affected by the oil projects, who denounce the intense pressure piled on them to give up their land in return for largely insufficient compensation, and report that they are prevented from freely using their land as they await to receive compensation”.

“We are concerned that the harassment against them may stifle the freedom of opinion and expression of other Ugandan individuals impacted by the Total Uganda oil project” (4).

According to Juliette Renaud from Friends of the Earth France,

“Only a few months ago, members of communities affected by Total’s project who had come to testify in France were harassed and arrested upon return to Uganda (5) and had to flee far from their homes. These arrests and other forms of intimidation are becoming more and more systematic. It is unacceptable! They clearly aim to silence critical voices and dissuade environmental defenders and journalists from mobilising and communicating on ongoing human rights violations and the environmental impacts of these mega-projects”.

For Maria Isabel Cubides from FIDH,

“These arrests come just days after the release of a report, in which we alerted about the safety of human rights defenders at Uganda’s oil frontier. These arrests prove once again that the conditions are not in place to allow the free participation of communities, journalists and civil society to the crucial discussions about the future of their region. We call on the Ugandan authorities to guarantee freedom of expression and to defend human rights, in accordance with their international obligations”.

According to Sylvia Mukasa, from LASPNET,

“Agent of Security forces don’t appreciate the role journalists play to inform the public. Protection of the environment is a fundamental right and the people around Bugoma forest and in Uganda have the right to stand up against its degradation and destruction. Their arrest hence infringes their right to freedom of speech through press as enshrined in article 29 (1) (b) of the1995 constitution of the republic of Uganda.”

According to Robert Kirenga from the National Coalition of Human Rights Defenders- Uganda,

“the continuous arrests of activists because they have challenged the verbal orders and decisions of District police Commanders(DPCs), which have no basis in law, is a violation of their right and constitutive of intimidation and harassment, which are all contrary to the Uganda Police Force Human Rights Policy 2019”.