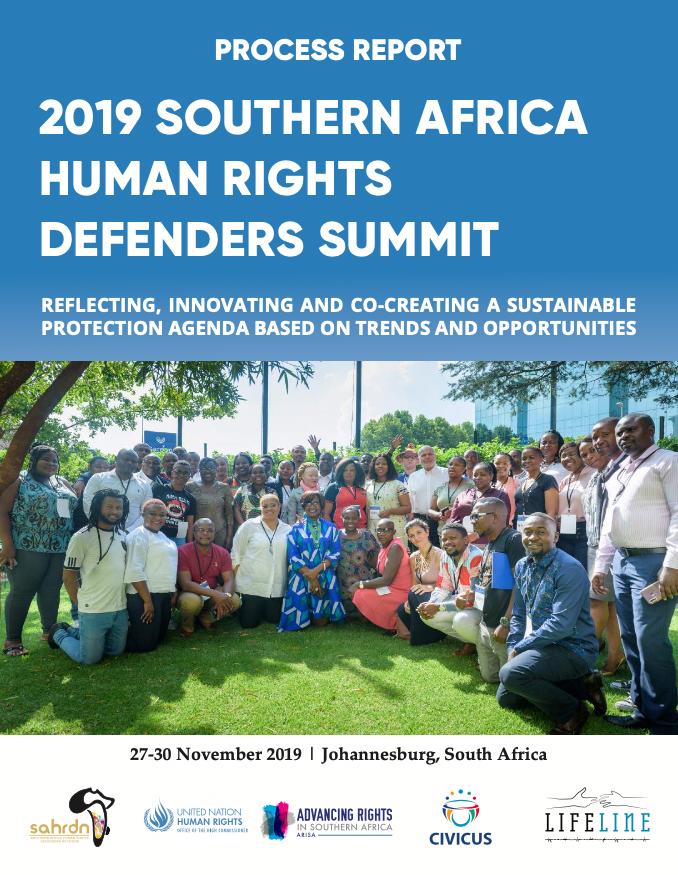 Posted at 12:07h in Southern Africa by Gentrix Barasa
Share

The summit was held under the theme; “Protection of Human Rights Defenders in Southern Africa: Reflecting, innovating and co-creating a sustainable protection agenda based on trends and opportunities.” It was attended by over 100 HRDs, policy makers, and human rights experts from eleven Southern African countries and various organisations, attended (See Annex 1: Participants list).1

The SAHRD summit served as a platform for capacity building as well as collective reflection and planning for SADC’s HRDs. Through democratic participation and engagement, the summit produced actionable ideas which were situated in the Southern African context. These ideas were built on a studied understanding of emerging trends and extant opportunities in the region as well as veritable entry points for human rights defense within the United Nations (UN) system.

The four-day summit revealed that the regional context of HRD’s work in Southern Africa was in flux, dynamic, and fraught with challenges and threats. A combination of factors which, often, undermines HRD’s efforts and endangers their lives. The summit noted that the myriad challenges confronting HRDs in the region included, inter alia, state and nonstate sponsored actions that range from assassinations and extrajudicial killings; online and physical attacks, threats and harassment; abductions and enforced disappearances; as well as politicization and criminalization of HRD work. It also noted that most of the stated attacks against HRD work had a clear illegal character although, in most instances, the perpetrators of egregious human rights violations, victimization, targeting and harassment of HRDs went scot-free. The summit noted a worrying, region- wide, increase in impunity regarding attacks on civil society in general, and HRDs in particular.

The 2019 SAHRD summit also reflected on the deleterious consequences for HRDs abilities to operate freely and execute their mandate on account of Southern African governments’ choices on human rights issues.

The summit resolved to keep monitoring context (structural, cultural and institutional elements with an impact on HRD work) and the need to increase advocacy efforts aimed at influencing SADC states. Beyond direct advocacy aimed at the SADC states, the summit also resolved to engage in collaborative actions aimed at increasing the costs of state intransigence regarding the promotion, respect, and upholding of human rights in the region.

Read the full report below: