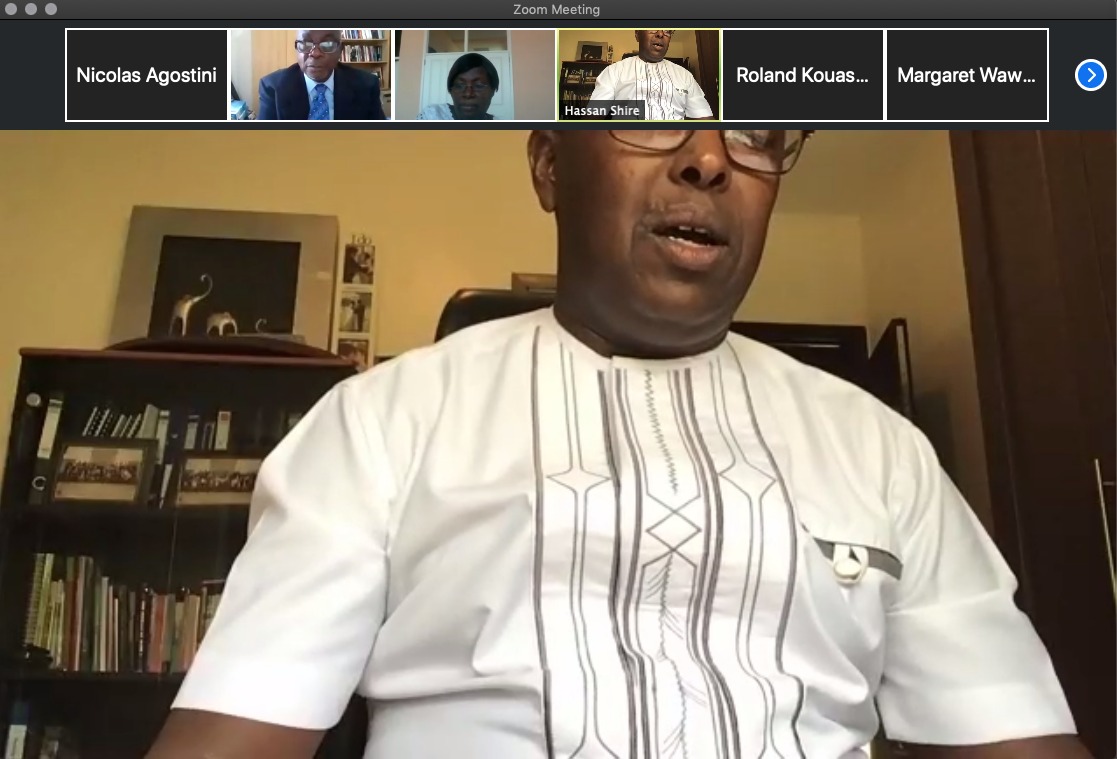 10 July, 2020
Statement of Hassan Shire, Chairperson of the AfricanDefenders and Executive Director of DefendDefenders at the 2020 NGO Forum

Posted at 11:35h in AfricanDefenders by Gentrix Barasa
Share

Hassan Shire, (AfricanDefenders Chairperson and the Executive Director of DefendDefenders), alongside H.E. Commissioner Solomon Ayele Dersso  (Chairperson, African Commission on Human and Peoples’ Rights) gave a statement at the 2020 Forum on the Participation of NGOs/Civil Society Organizations in the Work of the 66th Ordinary Session of the African Commission on Human and Peoples’ Rights.  The theme of the session was  “The Impact of COVID-19 on Human Rights and Governance in Africa.” In his statement, he highlighted the fact that a lot of civil society organisations have had to change their way of work because of COVID-19 and also the fact that the virus uncovered a lot of discrimination practices. To this regard, he mentioned the open letter addressed to the Chairperson of the African Union Commission,H.E. Moussa Faki Mohammed, on the discrimination and stigmatisation of Africans in China. The letter was signed by over 400 civil society organisations in Africa; 17, 000 African people from a broad cross-section of the citizens of the African Union and include women organisations and feminist movements, labour and students movements, youth organisations, professional associations, lawyers, judges, academicians, business people, clergy, artists, activists and journalists.

He further mentioned that there has been a general clampdown on civic space by AU member states to the point where some member states are trying to undermine the work of African Human Rights Systems and Institutions under the guise of AU reforms.

Other speakers in the session were Naji Moulay Lahsen – Representative of the NGOs Forum Steering Committee, Gilbert Sebihogo – Executive Director, Network of African National Human Rights Institutions, and the closing remarks were given by Mr. Roland Amoussouga-Gero – Director of Political Affairs, UNOWAS.

Read the full statement below:

Statement of Mr Hassan Shire, Chairperson of the AfricanDefenders and Executive Director of DefendDefenders

Allow me also to recognise the presence of some dignitaries: