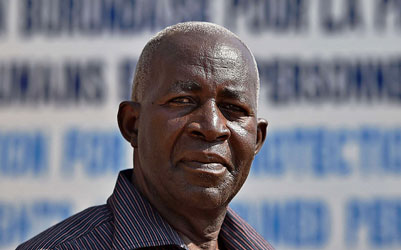 Pierre Claver Mbonimpa was awarded the East and Horn of Africa Shield Award 2015. He is the President of the Association for the Protection of Human Rights and Detained Persons (APRODH), a Burundian organisation which provides vital assistance to detainees and victims of human rights violations, including torture and sexual violence.

A courageous and outspoken member of the Burundian civil society, Pierre Claver Mbonimpa has been repeatedly threatened and harassed because of his work. In May 2014, he was imprisoned and charged with endangering state security after comments he made on radio. He was released over 4 months later on medical grounds. In April 2015, he was arrested again by Burundian security services but released the following day.

The crackdown on civil society that followed President Nkurunziza’s bid for a third term in office in 2015, forced Pierre Claver to flee Burundi, together with many other human rights defenders. Indeed, on 3 August 2015, Pierre Claver Mbonimpa survived an attempt to his life as he was shot in the face and neck. In October 2015, unidentified persons armed with rifles and grenades killed his son-in-law, Pascal Nshimirimana, and in November 2015, Mbonimpa’s son, Welly Fleury Nzitonda, was arrested, and later found dead.

He is currently in exile but continues to be active to promote peace and human rights in Burundi.

“Even if I find myself in another country, I keep track of what happens in Burundi, second after second, minute after minute, hour after hour.”