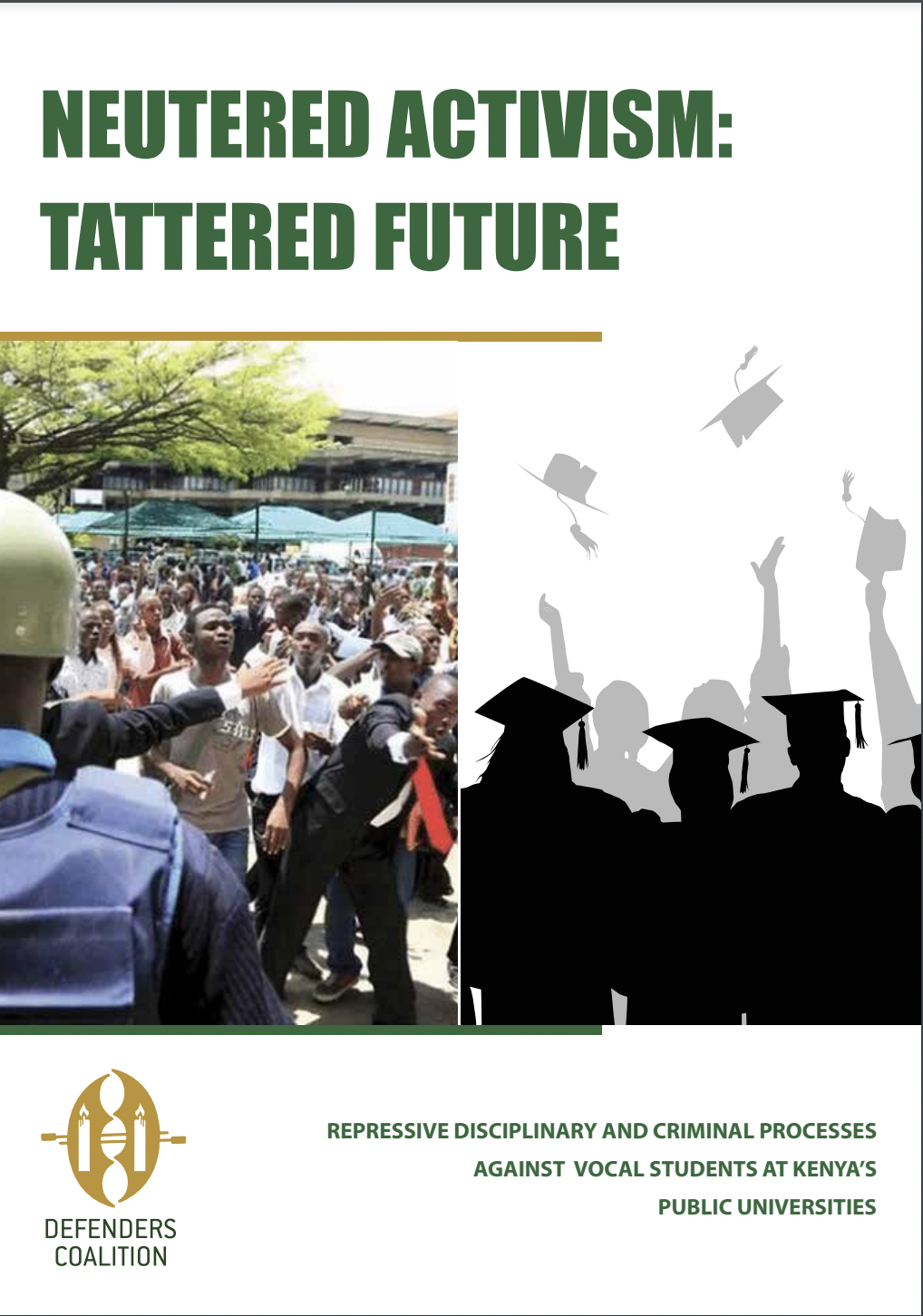 Posted at 07:46h in East & Horn of Africa by Gentrix Barasa
Share

This report was first published on Defenders Coalition’s website

Academic institutions are the hub for nurturing and sustaining the right to education. Whilst it is to be expected that universities will always stand for the right to education, including free thought and scientific research, that aspirational role of universities is not being realized considering the worrying pattern of students’ expulsions and suspensions by Kenya’s public universities, mostly on non-academic grounds. The systemic trends eschew the democratic vision of education and rely on the precarious despotic administration model which increases the vulnerability of the academic community to recurrent human rights abuse and violations.

Universities Act of 2012 is the legal-policy framework that guides operations of universities in Kenya. According to sections 19 and 20 of the Act, a University Charter is the instrument that establishes and gives legal status and authority to a University to inter alia undertake its academic programmes. The Commission for University Education in Kenya grants the charter to qualified institutions to offer university education and monitors the institutions to ensure compliance with provisions of the Act. The governance of a university is set out in section 35 of the Universities Act and includes a Council, Senate and Management Board. The Vice-Chancellor of a University is an ex officio member of a University Council, and is the academic and administrative head of the institution. He/she also has the overall responsibility for the direction, organization, administration and programmes of the University.

Before 2012, the Vice-Chancellors of public Universities were solely appointed by the president of the country. This left their tenure of office at the pleasure and mercy of the president. As a result, Vice-Chancellors were seen to play partisan roles, predictably siding with the government, often at the expense of the students’ welfare. Although the law changed, and a Vice-Chancellor is today appointed by the University Council, questions have remained concerning the independence of the office and the decision making of the university administration particularly around issues touching on management of student affairs and collective political culture.

Kenya’s university students have a rich history of organizing and political mobilization. And as such, especially during the Moi era, 1978-1990s, university students were seen as the unofficial political opposition in the country. As a result, in the 1980s, the government started the wave of arrest of students and their leaders. In fact, several student leaders from the University of Nairobi were arrested and subsequently jailed for their suspected role in the abortive coup in 1982. One of the students detained at the time was the then Chairman of the Students Union of University of Nairobi (SONU), Titus Adungosi who later died in prison. Later, left leaning politician and former legislator, Mwandawiro Mgagha was among the students arrested in 1985 following student clashes with the police at the University of Nairobi. He was subsequently charged with attending an illegal meeting and sent to jail.

In August 2019, the media published an interview with some of the former university students and victims of the suspensions. The students bemoaned the fact that some of their former colleagues were not certain if they would ever resume their studies4 . The extent of student intimidation in the colleges has been far reaching. According to the report, extreme disciplinary measures such as suspensions and expulsions are routinely used by university administrations to silence student dissent or fair articulation of their grievances5 .

As a result, student unrests have become common during the period of student elections. In fact, the election environment is a much-nuanced period for the students as some of them soon appear before the hastily convened disciplinary proceedings that routinely expel or suspend suspected troubleshooters in the aftermath of the elections. What is unfortunate is that the sword normally falls on the outspoken students who may have come into the radar of the administration for totally different reasons. The internal private security providers in the universities have also been known to be involved in giving surveillance and unworthy witness reports on some of the marked students who become easy disciplinary targets wherever the universities clean house after the unrests.

Contrary to the constitutional guarantees to a fair hearing, the victims are typically not allowed legal representation whenever they face indictments by administrations or the university disciplinary organs. The charges and counts preferred against them are sometimes only consisting of general youth misbehaviours rather than regulatory offences. But the disciplinary process once put in motion is high handed and ruthless – a show of supervisory powers of the administrators so that the victims serve as examples. The process ends up serving interests other than that of fairness and justice. In order to be safe, the students are better off keeping away from activities that would bring them to controversies of this nature which essentially means that the universities are slowly becoming the sinking ground for critical thinking, far away from the nurseries of vibrant debates and knowledge that the society had come to expect of them.