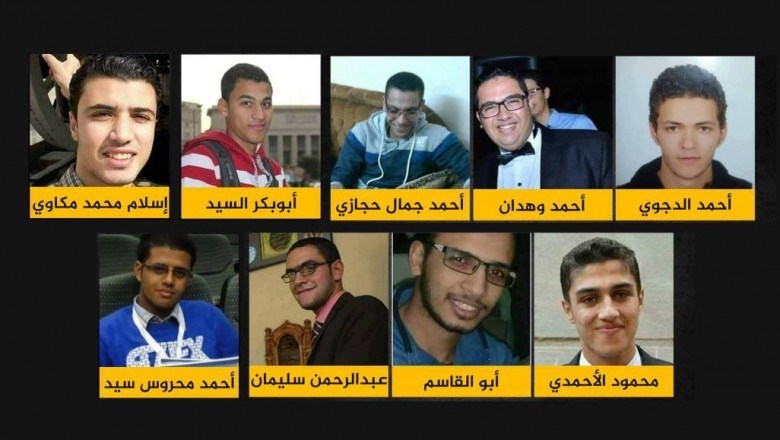 26 septembre, 2019
Egypt: Execution of nine defendants after unfair trial is retaliation, not justice

This article was first published by Cairo Institute for Human Rights Studies.

The undersigned rights organizations condemn the execution of nine young men on Wednesday February 20th following an unjust, politicized trial rife with torture and due process violations. We further reject the Egyptian government’s politicization of capital punishment; particularly its insistence on swiftly staging executions following terrorist incidents, likely to divert public attention from its continued failure in the “war on terrorism.”[1]

Wednesday’s execution by hanging comes just a week after the Egyptian authorities executed another six people in two separate cases; both sets of convictions similarly followed fundamentally flawed trials laden with due process violations including confessions extracted through torture, and enforced disappearance. At least 50 more people are currently awaiting execution, having exhausted all avenues of appeal.

The nine young men were put to death in connection with the 2015 assassination of former public prosecutor Hisham Barakat.  The trial (case no. 314/2016, State Security) was marred by gross violations and irregularities; most significantly, evidence of torture that was willfully ignored by the court and prosecution. Without their attorneys present, the defendants’ confessions were coerced through torture methods comprising full-body electrocution, and sexual assault and humiliation; reinforced by threats of death and harm to them and their families.

The prosecution deliberately disregarded visible signs of torture on the defendants’ bodies and refused to refer them to forensic examination. Instead, prosecutors simply noted the existence of the torture marks in the interrogation reports, without detailed reports documenting them, which was in turn disregarded by the court. The defendants were also forcibly disappeared and detained in undisclosed locations, later found to be state security sites.

The death sentence against the nine defendants was issued by one of the terrorism circuits of Egypt’s criminal courts; judges presiding over terrorism circuit cases are arbitrarily selected without reference to any objective or formal criteria. The head of this circuit, Judge Hassan Farid, is notorious for his zeal in instituting capital punishment, having meted out no less than 124 of the 660 death sentences handed down by terrorism circuits since their establishment in the latter half of 2013. The Cassation Court shamefully upheld the terrorism circuit court’s ruling against the nine defendants; willfully ignoring the grave violations and irregularities that riddled the proceedings, as well as the lack of any material evidence implicating the defendants.

The prelude to the trial itself forebode what would become an appalling spectacle of the Egyptian state’s insistence on escalating its use of capital punishment.  Extrajudicial executions preceded Wednesday’s formal executions; with at least ten people killed by the police without any investigation or trial, allegedly for their involvement in the crime.[2] These extrajudicial killings were accompanied by clearly contradictory statements regarding the identity of Barakat’s assassins;[3] with the state claiming to have identified them on at least three separate occasions. In total, nearly 20 people were killed by the Egyptian state for a crime to which they are linked neither by credible evidence nor any semblance of due process.

The Egyptian state has showcased a single-minded dedication to accelerating its execution spree without even a token gesture towards upholding the fundamental tenets of justice and due process. It has repeatedly disregarded appeals from local and international rights groups to immediately halt its unjust use of the death penalty; depriving its citizens of their ultimate right to life on the flimsy basis of torture-coerced confessions and one-sided evidence derived from state security sources.

Egypt’s astounding persistence in executing citizens denied free and fair trials is not simply an affront to justice; it is tantamount to state-sponsored murder masquerading under a guise of legality.

[1] “The executions ‘suggest a troubling trend on the part of the government in which executions appear to be tools of revenge following terrorist attacks rather than a part of an orderly criminal justice system,’ said Timothy Kaldas, non-resident fellow at the Tahrir Institute for Middle East Policy.” https://uk.reuters.com/article/uk-egypt-execution/egypt-executes-nine-over-public-prosecutors-killing-idUKKCN1Q912L?fbclid=IwAR3mIW3j6Fnqz4QBF_P7IQ7pbR3FNhCIi6p9ZV–tKTXEBvq33QCkq7Z64c

[2] Just one day after the incident, the Interior Ministry released a statement saying that nine people connected to the assassination had been killed. Some time later, the Interior Ministry’s official Facebook page later carried a statement that two more people had been killed in an encounter in Basatin—one of them allegedly the founder of the armed wing responsible for Barakat’s assassination

[3] Security sources told various media outlets that the mastermind of the attack was the leader of Ansar Beit al-Maqdes, Hisham al-Ashmawi. In a press conference later, former Interior Minister Magdy Abdel Ghaffar announced that Hisham Barakat’s killers had been arrested; he added that Hamas had carried out the crime and that the assassination had been ordered by a fugitive Brotherhood leader in Turkey.